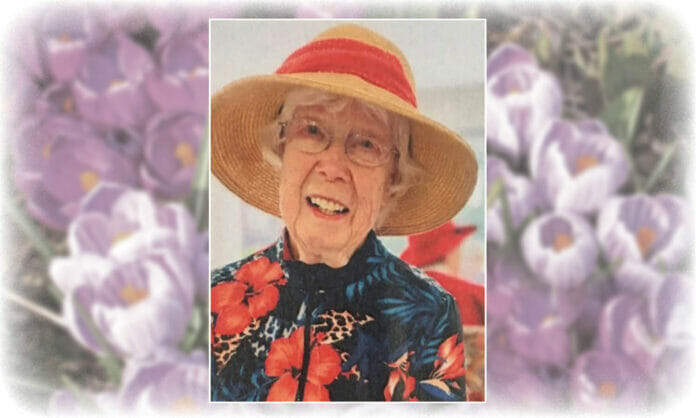 Peacefully, on October 14, 2022 in Vancouver, aged 90 with family at her side. Predeceased by her husband David Spencer, Margaret will be deeply missed by her children Jonathan (Julie), Mary, Michael (Connie), and Christopher (Carolina), her grandchildren Caitlin, Emily, Mika, Cole, Elizabeth and Madeline, her great granddaughter Noah, her companion Steuart Beattie and by the many, many friends she made on her journey through life.

Born in England, youngest of three children, she was sent to boarding school during the war. She moved to Vancouver where she met David and settled in Montreal where they raised a family with love and homemade bread. They retired to Salt Spring Island, her home for the past 30 years.

Mother, Girl Guide leader, kayaker, walker, traveller, Margaret made friends in all spheres of life, at all ages. She was a loving mother and Grandy. She defined “intrepid”, travelling the world, walking and backpacking all over Britain, Europe, and Asia, often shocking her children with accounts of sleeping on train station floors, and hitching rides with strangers. A true pilgrim, she completed the Camino de Santiago several times, walked the Thames Path as a relay with her four children, and visited both the Arctic and Antarctic. As a mature student, she excelled in classics and took her grandchildren on memorable trips to Greece and Italy.

Following the example of her mother, one of the founders of the Girl Guides, Margaret was a deeply committed Girl Guide leader, District Commissioner and proud member of the Trefoil Guild. She sang in church choirs all her life, was a founding member of St. Lawrence Choir, and she and David hosted some legendary choir parties in Montreal. In Montreal and on Saltspring Island she volunteered in many community organizations.

We are immensely grateful to the staff at Sunrise Seniors Residence for their compassionate and attentive care. In lieu of flowers, donations may be made to the Saltspring Island Foundation or the Girl Guides of Canada.

Join us on Saturday November 12, 2022, at 2:00PM for a Celebration of Margaret’s Life at All Saints-by-the Sea Anglican Church on Saltspring Island.