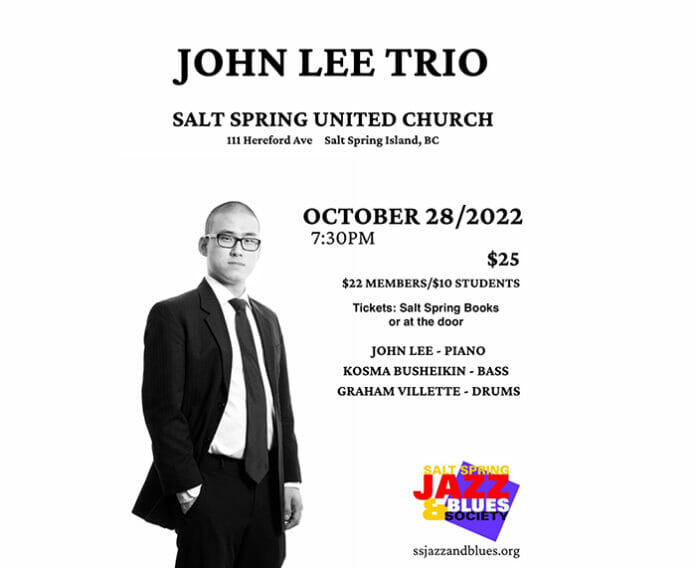 Salt Spring Jazz and Blues Society is pleased to present the John Lee Trio in concert at the Salt Spring United Church on Friday, Oct. 28.

Raised in Nanaimo, multi-instrumentalist Lee is a young jazz artist highly acclaimed nationwide. With a 2016 bachelor of music in performance degree from Boston’s Berklee College of Music, he regularly performs as a leader and in-demand sideman on five different instruments. He has shared the stage with international jazz artists such as Cyrus Chestnut, Larry Fuller, George Colligan, Seamus Blake, Terell Stafford and Ingrid Jensen, as well as prominent Canadian jazz artists and educators Christine Jensen, Brad Turner, Jodi Proznick and Phil Dwyer in, among other places, New York City, Boston, Washington, Toronto, Vancouver and Victoria. With the support of Cory Weeds and the Cellar Music Group, Lee recorded his first album “The Artist” in 2021 under the Cellar Live record label, featuring legendary drummer Carl Allen.

On Salt Spring, Lee has performed several times at different venues on bass, drums and piano, most recently with the Steve Kaldestad band at the ArtSpring Treasure Fair concert in July 2022.

Busheikin and Villette are both rising young Vancouver Island jazz musicians, graduates of the VIU jazz program and teaching with the Nanaimo Conservatory.

Born in the Czech Republic, Busheikin moved with his parents to Denman Island when he was two years old. He has performed at venues around the islands and Vancouver, such as Hermanns, Frankies, the Port Theatre, Tofino Jazz Festival, Hornby Festival and more. Some notable people he has studied with include Ken Lister, Lee Ellefson, Pat Coleman, John Lee, Hans Verhoeven and Ben Henriques.

Villette has been playing music professionally since the age of 15 and teaching drummers from ages five to 75. After graduating from VIU in 2017, he earned a masters degree in jazz performance from the University of Toronto. He has performed with, among others, Cory Weeds, Joe Magnarelli, Akiko Tsuruga, Tony Genge and Ryan Oliver, and played in the NMA Big Band, under the direction of Bryan Stovell and the NOLA Nighthawks, under the direction of Andrew Homzy.

Admission price for Friday’s show is $25 ($22 for Jazz and Blues Society members and $10 for students). Tickets are available from Salt Spring Books, society board members or at the door.

azz fans on Salt Spring are in for a serious treat with the much-anticipated appearance of legendary NYC jazz pianist, composer, educator and band leader Michael Weiss on the ArtSpring stage Nov. 24.

By SUE NEWMAN SPECIAL TO THE DRIFTWOOD Get ready for round two of the Salt Spring Jazz and Blues Society’s Jazz Jam at The Legion! On the...

Jazz group at All Saints

Jazz vocalist Caroni Young is the next Tea a Tempo performer, presenting a program called Parisian Jazz Cafe. Beginning at 2:10 p.m. on Wednesday,...

A sense that music is a valuable part of the learning experience and excitement about   the possibilities are building at Salt Spring Island...