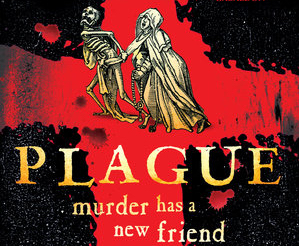 Salt Spring author Chris Humphreys has reason to repeat the old proverb “It’s an ill wind that blows no good,” and not just because historical fiction is one of his favourite genres.

Humphreys’ novel Plague, first published in 2014, has recently surged to the top of the list in Kindle sales, reaching number one in medical fiction and number three in historical mysteries. On Saturday he said the Kindle version of the book had sold 700 copies in 24 hours.

Plague won the Best Novel prize in the 2015 Arthur Ellis Awards for Crime Writing, awarded annually by the Crime Writers of Canada. The story is set in 1665’s plague-ridden London and is anchored by an odd-fellow team of characters in a thief taker and his quarry, a disenfranchised noble turned highwayman.

Humphreys’ fun crime fiction clearly has much historical interest regarding how societies have dealt with the worst pandemics of the past, along with many other fascinating tidbits. He charts religious fanaticism at its most crazed level and the restoration of the monarchy with Charles II. He even touches on the difficult path of the earliest stage actresses and provides a glimpse into the notorious Newgate Prison.

Those who enjoy Plague will no doubt wish to read the follow-up story called Fire, set in the following disastrous year for London in 1666.

All of the news is not bad

Will Millar paints window into Ireland’s past