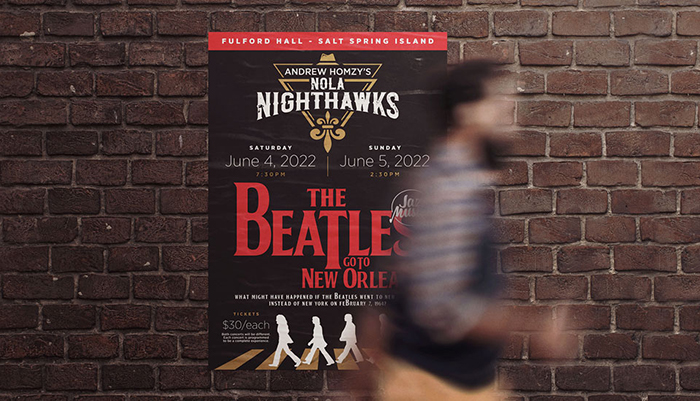 Beatles get jazzy with the NOLA NightHawks at weekend concerts

Islanders are invited on a Beatles-themed “magical mystery tour in a parallel universe” when a group of stellar musicians presents The Beatles Go To New Orleans.

Two interactive and annotated concerts with Andrew Homzy’s NOLA NightHawks will come to Fulford Hall on Saturday, June 4 at 7:30 p.m. and on Sunday, June 5 at 2:30 p.m. Each concert is programmed to be a complete experience independent of the other, both of them exploring: “What might have happened if the Beatles went to New Orleans instead of New York on Feb. 7, 1964?”

According to press material, Homzy has channelled the spirit of legendary and innovative New Orleans and Louisiana (NOLA) musicians such as Louis Armstrong, Fats Domino, Allen Toussaint, the Neville Brothers, Dr. John and many others with each of his arrangements of beloved Beatles songs recast in different styles, but always keeping the melodies foremost.

Homzy has an international reputation as a musician, composer, scholar and producer. Since moving from Montréal to Nanaimo in 2009 he decided to return to what brought him into music: traditional jazz and the total spectrum of New Orleans music. In 2018, Homzy began researching and studying how the Beatles interacted with various musical influences and discovered remarkable associations with jazz, which had become a mainstream popular music in England from 1945 to 1963. He then began crafting arrangements of various Beatles tunes that present a compendium of NOLA styles, bringing the audience into a creative imaginary alternate reality: What might have happened if the Beatles went to New Orleans instead of New York on Feb. 7, 1964?

Before the music starts at the June 4-5 events, Homzy will present an introductory lecture on his musicological discoveries. The concert will also include a brief narrative to each piece, with a few fun and historical surprises. After the concert, there will be a Q&A session with the entire band.

Tickets for the shows are available at Mondo Trading Company in Ganges (250-931-2553) or through homzy.ca.

An UnDutiful Daughter on stage at Beaver Point Hall