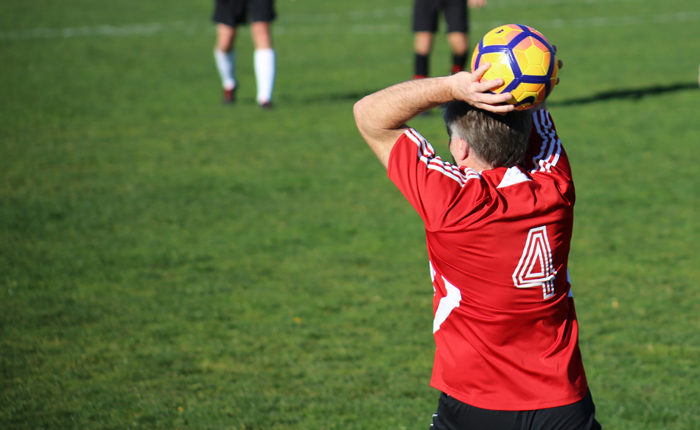 Old Boys 3Ms Unable to Stick It to GH Gunners

Old Boys mingled at Fulford ferry terminal wondering if the malaise of the last several weeks had worn off and everything would just be tickety-boo for the game against Gordon Head Gunners at Tyndall Turf Field in Gordon Head.

Some wore black arm bands in memory of the end of Liverpool FC’s unbeaten streak and their chase to emulate Arsenal’s “Invincibles” of the 2003-04 season. Some suggested that Old Boys were more like the “Old Contemptibles” of the British Expeditionary Force of 1914, sitting on the bench and idly watching the world go by. All were wondering if we had enough “invincibles” or even “contemptibles” to field a full team for the game. Manager Graham Tweddle confidently confirmed a full roster with the possibility of a substitute to back up the full-strength team.

There has been a suggestion that possibly the comfort and conviviality of travelling on the Queen of Cumberland while providing an excellent travel experience may have allowed the Old Boys to succumb and be unable to raise the intensity of the game come kick-off? This theory has some support as team tactics seem hardly ever to arise as a subject of any intensity in the comfort of the Old Boys Lounge kindly provided by the BC Ferry Corporation.

As is my want at Tyndall, I made a bee-line to the local bistro to fortify and console myself depending on the result with the local well-known sausage roll delicacies. Luckily a new batch had just come out of the oven and All Was Right With the World.

Old Boys warmed up with the knowledge that Donny Brown had returned from vacation “Across the Border Line” (Ry Cooder 1987), but MVP of last week’s Match Mr. Ben Cooper, according to reliable sources, had gone like Mr. Smith to Washington to mingle with friends. Today’s man just became yesterday’s man. Where is team loyalty?

Full team kicked off under most unusual conditions for Tyndall, with a hint of sunshine and no howling gale sweeping down from Mount Douglas that usually makes playing, spectating and reporting a frigid experience. Old Boys started with a new attacking lineup, the 3Ms — Mike Smith Mike Davis and Mike McCormick — hoping to mine some golden goals!

Buoyed by the warmth and light, Old Boys soon pressured the Gordon Hill defence and goal but found it difficult to supply the killer final touch. Both teams seemed to be infected by a virus that produced frenetic actions at both ends of the field.

I mused “This is not gonna last!” but the players found each other with uncharacteristic accuracy in their passing. Had the yoke of stress been lifted from the Old Boys? Would they now find the freedom to play as themselves without the doubts that had weighed down the performance of the last few weeks? The final result would be arbiter.

Time after time Old Boys worked the ball down field to find the final closing shot go past the posts, over the bar or into the goalkeeper’s arms. The power in the shots was obvious; the direction towards the net not so. In defence Tweddle seemed to have found  himself in serious trouble but executed what will become known as the “Tweddle Twirl,” calmly extricating himself to launch an attack upfield. Ooohs and aaahs could be heard from spectators around the stadium.

Caught somewhat flatfooted, Dennis Shaw gave away a professional foul that allowed his defence to regroup before the free kick could be taken. No flies on our Dennis! The 3Ms continued to all have shots on goal but no success. Mark Aston’s powerful grounder just found the keeper. Counter-attacks gave Gunners opportunities but Richard Steel in net handled all with aplomb. As the first half wound down, Steel had to make a finger tip flip over the bar to keep the scores level at 0-0. Stefan Cermak, with his speed and physicality, helped the defence mop up the few Gunner attacks. A final Old Boys shot over the bar brought the first half to an end. Chances, chances, chances — but no cigars!

Tweddle looked to change the momentum and opted for a new line up: “a sort of diamond thing!” which all knew meant little change from the tactics of the first half, but Shaw and Steel traded GK jerseys for the second half.

The second half saw Old Boys move the ball better using the “diamond thing,” but the chances that came were all spurned. Frustration was mounting on the field and in the press box.

Old Boys retreated in defence and were under pressure for about 10 minutes and a scramble in defence allowed Gunners to poke the ball into the net for a lead.

The floodlights came on but provided only light but no significant boost of energy. Mike Berndt turned up as a second half substitute and went into action with little warm up or any idea of the team tactics. A rainbow arched over Tyndall but no “pot of goals” could be discerned at either end.

I was suddenly livened up by a mobile phone cacophony of sound — “Pa Pa Pa Power” (by Dead Man’s Bones 2009) — which boded ill for a future result for the Old Boys. Girding their loins, the players launched attack after attack in the last 15 minutes of the game and the Gunners keeper chanced his luck one too many times. Previously the keeper had made clearances straight to the Old Boy strikers that offered golden opportunities, but surprise had turned into more chances spurned.

Then a badly timed clearance came to Cermak, who instantaneously fed McCormick with an opportunity to show his Italian ancestry by performing a looping Panenka, worthy of Pirlo, over the head of the backwards-scrambling goalkeeper to tie the game at 1-1.

With the bit between the teeth the Old Boys strived for the winner and on the stroke of the final 90 minutes McCormick wheeled away, celebrating the winner only to see it cannon off the post, cross over, come off the other post and be scrambled away. VAR indicated no goal, so the score remained 1-1.

Post-game locker room analysis focused on the many, many chances that went begging in both halves and how lucky that the Old Boys salvaged a draw in the end despite the possession and goal chances they spurned. As usual, by the time the Queen of Cumberland disembarked at Fulford all was mellow and the Old Boys had actually won the game, despite any reporting to the contrary. Everyone had awarded themselves the 1914 Star to go with the many medals and ribbons of Old Boys campaigns.

Old Boys move on to the final stage of stages of football grief — acceptance — when they try to get on track at GISS field against Vantreights 48s this Sunday morning, March 9 at 10:30 a.m.