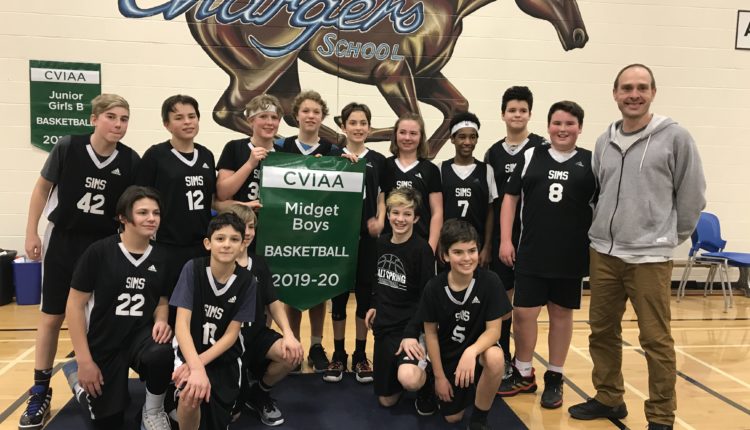 The boys won all three games at the event hosted by Duncan Christian School, including the final game against Frances Kelsey by a 43-25 score. SIMS athletic director Tom Langdon credited the team’s coaching by Rowan Hughes and the efforts of the athletes.

“Every player contributed throughout the season,” he said.

The boys were undefeated in the regular season.

“They have grown a lot and definitely have a bright future ahead of them at the high school,” said Langdon.

Meanwhile, the Gulf Islands Secondary School senior boys Scorpions finished their season in a tie for fifth place at the Vancouver Island AA championships on Saturday, Feb. 22. After winning their first game of the tourney over St. Andrew’s by an 86-58 score, GISS fell to Lambrick Park by 86-59 on Friday.

Facing Pacific Christian on Saturday, GISS lost any chance to get to the provincial championships with a 69-62 loss and finished in a tie for fifth place. Player of the game honours for GISS at the tournament went to Matthew Schure, Aaron Moise and Gavin Donaldson. Schure also made the second all-star team.

One week earlier, the Scorpions finished second behind Brentwood at the north island championships held at Kwalikum Secondary School.

Viewpoint: Legal Does Not Mean Just

Racers set for championship event at the Sailing Club