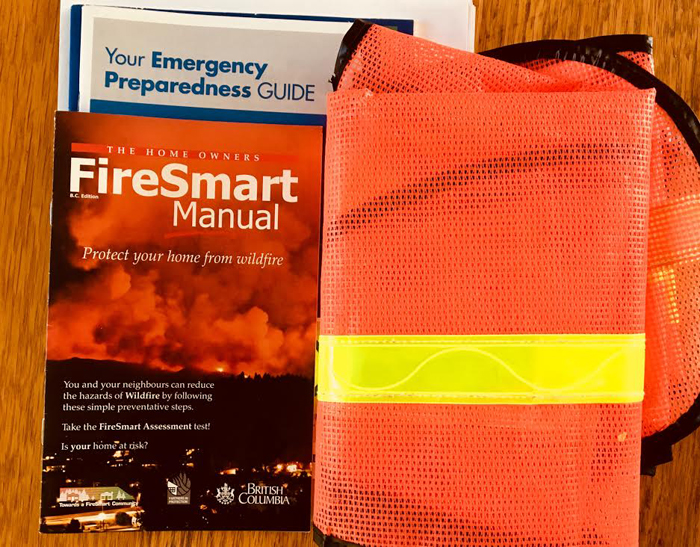 The day we moved in a neighbour walked down the driveway with a jar of homemade plum jam and became a life-long friend. Being welcomed home is the best feeling in the world.

Twenty years later our home is filled with 26 fire-nervous neighbours to discuss the recent fire and our ability to respond. Three days after this fire threatened to turn much of what we love to ash we gathered to discuss how our chapter of the emergency pod system worked and needs work.

We’d like to share some of what we learned. We have many questions and concerns. As one neighbour wrote this morning, “(these) efforts today may help prevent future tragedies.”

Smoke was spotted and reported by at least three people at 3:15 p.m. including a farmer about to hay his field. Twenty-three minutes later, firefighters conducting a training exercise just down the road at Ruckle Park arrived. Mark, my husband, our local POD captain, while often home was away at work. Our landline was also uncharacteristically offline.

After years of drought this two-hectare fire just served us our wake-up call. We knew it was coming. Here it is. If the wind had blown as powerfully as it had the previous two days I wouldn’t be sitting here writing this, nor you reading it. Beaver Point Road would have been closed off and an at-capacity campground of visitors would have much less emergency information than the hundreds of south-end residences. It was only after the all-clear sign was provided that level-headed responses turned to high agitation combined with post-event adrenal fatigue. In an emergency it is time to act, not try to think. Mutual preparation is our best survival strategy.

At 5:30 p.m. I picked up five calls from neighbours informing, questioning and updating. I immediately called 10 other neighbours asking them to call the people closest to them. I emailed updates to the people I had addresses for, but most of these were on Mark’s computer. In the adrenaline rush I didn’t think to use his computer. The fact is most of us did not have fellow neighbours’ contact information.

Our newest neighbour knocked on doors. Sharing information, we reminded ourselves to have grab-and-go bags ready. Less than half of us had an emergency kit at hand. At this point, we were told that a brush fire was contained. This, however, was only partially true. Over the course of six hours, some 5,000 gallons of Weston Lake water pumped uphill from the community-beloved home of Katya Mycyk and Steve Forbes. Forbes, a talented blacksmith by trade, wearing only shorts and T-shirt, bushwhacked up to a very difficult site alongside what he described as 20 “very sharp, hardworking emergency responders.”

They have been here every day since and have pumped another 1,000 gallons up the hill to ensure underground roots systems are not still burning. Bless our emergency responders! May we discover ourselves worthy of the risks you take on our behalf.

Our personal-to-regional response systems need refining. We discovered that at least 12 people (all of whom we had little to no regular contact within half a kilometre of each other’s homes) were not on the emergency list. To be benevolently blunt, fires care little for privacy, property value or social opinion. Here’s the rub: it was mostly renters who were not on the list. No excuse holds up to people’s lives and welfare. Divided cultural and class systems put our community at risk. Neighbourhood tiffs put our lives at risk. Bruised egos can be mended. Ideologies can find commonalities. Shared susceptibility can evolve into shared accountability.

On Sunday, Aug. 5 we hosted our first “pod-luck” in a decade. Some of us recalled with a chortle how in 1999 we came together to prepare for Y2K. Just to be safe, was our motto. This week our home was packed once again. We grabbed tea, coffee and fresh blueberry crisp, sat down and introduced ourselves. Some of us settlers have lived here since 1974, one new friend moved across the road five days ago. All visibly shaken, we could feel shoulders drop by an inch within 10 minutes of gathering.

Steve and Katya provided first-hand knowledge of what happened. We collected our names, home and email addresses, emergency contact information, identified potential resources and skills. We discovered we have a former Gulf Islands fire chief in our midst. We have a trained search and rescue single mom, crisis counsellors, people with first aid, health and healing professionals, experts of local flora, fauna and decades of farming knowledge.

We learned how broom, moss and salal act as fire accelerators because of their volatile oils. We have four tractors if needed. Several ponds. We were reminded of the advice of local Indigenous elders who have said, “When the storm comes, tie your canoes together.”

Along with educating ourselves about exit routes, pet and farm animal protocols, and fire proofing the property (i.e. not having wood stacked beside the house), other smart suggestions included putting copies of important documents in the grab-and-go bags, (consider keeping originals in the freezer as they may have a better chance there). We reminded each other to not burn toilet paper in the wood stove. Also, for those less agile we realized a smaller overnight backpack is a smarter choice during a fire than a pre-labeled large suitcase for an earthquake). I’m giving up our gas mower stored in a wood shed for a cordless Toro electric mower.

This week’s actions include making sure we all have one another’s confidential contact information. We’ll set up a designated Google document for quick access. We will advocate for better cell reception in our valley.

We discovered that while we may have differing physical, technological and community skill capacities, between us all we have an exceptional level of skills and abilities. We were rediscovering what living in community means. Our next brunch pod-luck date is being set. Photocopies of all emergency information will be distributed within the next two days. We’ve decided to have two co-captains and a back-up alternative in our area.

At our core, we all need reassurance. Early adaptors and good leadership recognize signs of crisis. We’re blessed with generations of hardworking, smart people on this island.

We encourage the wider emergency system help us immediately organize larger preparedness meetings at our local hubs such as at Beaver Point Hall. We request these beloved hall and school boards help us gather by scheduling regular bi-annual meet-ups. We have much to talk about and do.

We’re proud of our neighbourhood. We’re wildly in love with this land we all steward and share. We are also scared and doing something about it. Preparing for the worst we’re determined to be here for one another along the way. By pulling together a quality of love remerges. Knowing and caring about our neighbours is truly one of the greatest feelings in life. As neighbours and a POD we came together to reassure one another that we have each other’s backs. We’re committed to not leaving anyone behind. We discovered we have work to do to live up to that commitment. Crises bring out the best of us.

The phone just rang. Our newest neighbour Bryan has informed us that the smoke in the valley is from a new 20-hectare fire in Nanaimo. Mark is on the phone and emailing.

The writer lives in the south end and has for the past three decades been an arts-based community health advocate and researcher.