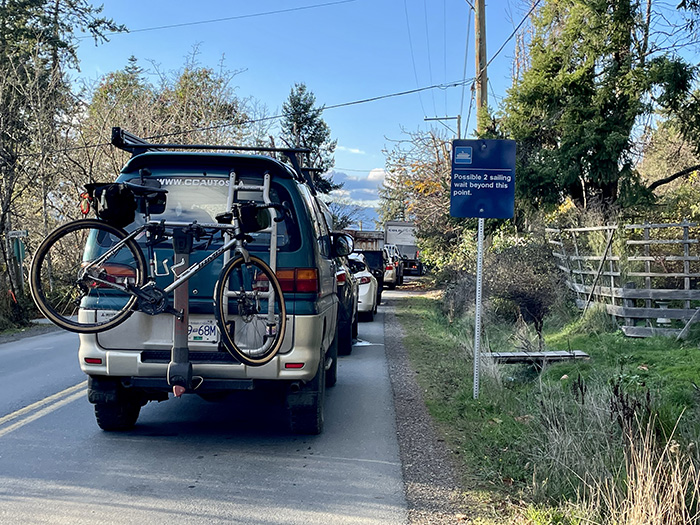 For those of us that use Route 6 between Vesuvius Bay to Crofton on a regular basis, and the residents of Chaplin Street in Crofton, the answer is unequivocal: there is insufficient capacity.

A recent letter from BC Ferries (BCF) Customer Relations on behalf of CEO Mark Collins stated that BCF did not expect ridership to recover for the next two to three years because of the effects of the pandemic on business. The letter also stated that they anticipate that the MV Quinsam (vehicle capacity 63), which will be redeployed from the Nanaimo to Gabriola Island route in the spring of 2022 to Route 6, will serve capacity demand adequately until 2035 when the ship’s useful service life is complete at approximately 55 years of age.

The above two comments by BCF management are patently unreasonable given the current state of ridership on Route 6.

Actual BCF data repudiates their own comments. From July through October of this year ridership is up close to 19 per cent from the same period in 2019. There was a definite uptick in ridership in June when residents began to travel once again and visiting tourists returned. The current building boom has kept all our suppliers and trades busy going back and forth. The Bowen Queen with a capacity of 63 vehicles experienced overloads on a regular basis. One to two-sailing waits with vehicles lined up on Chaplin Street to the turn-off onto Crofton Road were not uncommon. On the Vesuvius Bay side were one to two-sailing waits with traffic backed up to Sunset Drive. Generally in the summer months, Mondays and Thursdays are colossal vehicle gridlock nightmares. Just ask one of our BCF terminal marshallers who take the constant verbal abuse over the under-capacity situation. They are doing their best with the tools provided.

I think everyone who is familiar with and uses Route 6 on a regular basis appreciated last week’s “Community fed up with Quinitsa” Driftwood piece. Hats off to ferry advisory committee chair Harold Swierenga and chamber of commerce president Darryl Martin for disclosing some of the Route 6 issues. The current situation is intolerable on Route 6.

I have a proposed solution for Route 6. Take the MV Quinsam and MV Quinitsa and run them on the hour from each terminal. With a turn-around time of approximately 30 min at each terminal, this service should rival the on-time performance of the British and German rail services.

In so doing you provide immediate relief to ferry traffic gridlock at both ferry terminals. However, the silver lining might be that Fulford ferry traffic will be mitigated by north end residents choosing to use the Vesuvius Bay terminal rather than Fulford to access southern Vancouver Island. Having to be at the Fulford terminal one hour and 15 minutes prior to be assured of travel, after driving 30 minutes from the north end, would make it an easy call for most. The return of showing up 30 minutes prior to the scheduled time at Vesuvius Bay terminal without a sailing wait would be a distinct possibility with two ships running. The Town of Crofton will potentially have Chaplin Street returned as a thoroughfare instead of being used as a parking lot for BCF. It’s a win-win situation for all three terminals by mitigating traffic congestion and relief to all residents who live near a ferry terminal. With the new Cowichan hospital opening in 2026 and a 10-minute drive from the Crofton terminal, ridership will only continue to grow for this and the other amenities the Big Island has to offer. It’s interesting to note that ridership on the Fulford ferry is down by .06 per cent from July through October of 2021 compared to the same time frame in 2019. The migration to travel from the Vesuvius Bay terminal seems to have begun already. If anyone would like to repudiate my data, just ask one of our dump truck operators on your next crossing on how much productive time they lose to ferry waits on a daily basis. Darryl Martin alluded to this in his comments last week.

For those who come from a contrarian point view and say that this would be extremely costly for BCF, here are a couple of little known facts:

• Route 6 Vesuvius Bay – Crofton is the most cost-effective route in the inter-island system, subsidized at only $205 per capita per year. (All smaller routes within the ferry system are subsidized.)

• Route 19 Nanaimo – Gabriola is subsidized at $1,220 per capita per year. But here’s the thing: Route 19 is receiving two new Island Class eco-ferries, which will incur terminal upgrades for the spring of 2022, providing a two-ferry service for Gabriola residents. Each ferry cost approximately $50 million.

Equally interesting, the distance on both Routes 6 and 19 is three miles and Gabriola residents pay approximately $9.50 less per crossing. Hmm, it’s either good negotiating skills or karma on behalf of the elected officials in both Nanaimo and on Gabriola Island. Hats off to them.

• Route 5 – Southern Gulf Islands Route is subsidized at $4,910 per capita per year. Route 5 is slated to receive the latest Salish Class vessel — the Salish Heron — in the spring of 2023. The Salish Heron, capacity 138 vehicles, cost $95 million. Another hmmm? However, BCF CEO Mark Collins advises the Southern Gulf Islands residents that sailing waits will be a thing of the past. Hats off to our friends and families over there as well, well done!

I believe the way forward is to campaign BC Ferries for a two-vessel service on Route 6.

Email BCF CEO Mark Collins – mark.collins@bcferries.com and cc to CRD director Gary Holman – ssidirector@crd.bc.ca with a subject line of “The Fix For Route 6.”

The main body of the text should politely request a two-ferry service on Route 6 for the spring of 2022 to end traffic gridlock at Vesuvius Bay, Crofton and Fulford Harbour terminals. Thank you! (Please keep your comments civil).

The writer is a Salt Spring resident and frequent user of Route 6.