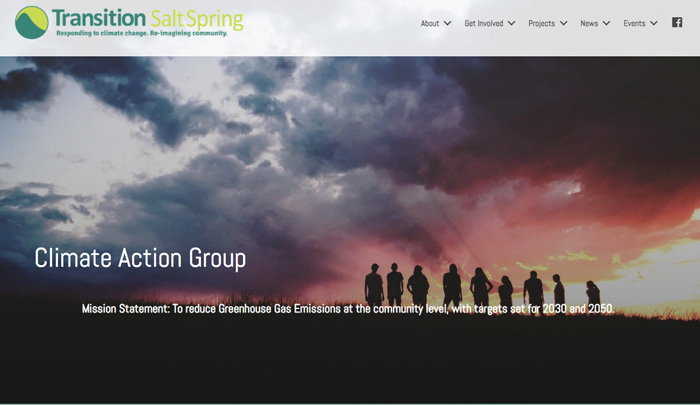 Have you ever had a party where everyone invited came? That was the scene on Nov. 30 when the Community Alliance hosted a special online meeting with Transition Salt Spring (TSS) Society featuring key findings from the soon-to-be-released Salt Spring Island Climate Action Plan 2.0.

CAP 2.0 is the product of more than 18 months of work on the part of a team of more than 30 volunteers, including feedback from 2,000 islanders and 50 stakeholders. The plan has more than 250 recommendations on what we need to do on Salt Spring to reduce emissions by 50 per cent by 2030, and help keep our community and natural systems resilient in the face of climate change.

To kick start the release of the plan, we invited over 50 stakeholders representing key agencies, local government, business, institutions and island-based non-profits to hear CAP 2.0’s key conclusions. The group also received an invitation to join TSS’ brand new Climate Action Network to collaborate in developing the initiatives we need to have a safe and resilient future as our climate changes.

TSS delivered an overview of the climate risks Salt Spring faces over the next 80 years, illustrating a future with zero frost days, a 25 per cent increase in days with rain over 20 mm, and average summer highs over 30°C.

All this bodes poorly for climate change impacts like infestations of pests (which will survive our California-like winters), erratic spring pollination of our island’s fruit trees, longer and deeper periods of drought, and — Salt Spring’s greatest climate change risk — forest fires.

While professional scientists on the CAP team developed the forecasts, we included in the presentation fictional but plausible headlines from a Driftwood of 2080 to make the data more relatable.

Sadly, headlines like these are far from exaggerations because these types of events have already begun to occur. A hotter future with more storms and heavy rains will simply accelerate the processes driving these events.

Another change already underway is sea level risk. By 2080, our seas will be one metre higher than they are today. At the meeting, we showed sea level risk maps for three island locations generated by scientists and mapping specialists.

Attendees heard that by 2080, higher sea levels will begin to flood parts of Ganges. Combine that with king tides and an additional storm surge, and flooding throughout Ganges is very likely, with water flooding to just past the public library.

Scores of businesses and pieces of infrastructure — from Mouat’s and Thrifty’s, to our library and the wastewater treatment plant — could all be affected, with big and expensive consequences.

Think of the costs to our homes and public infrastructure if we don’t act now. Some may balk at the costs of proactive preparation, but the future costs in lives, damage and hits to our economy will be far greater if we kick this can further down the road.

There are payoffs for taking action on climate change, aside from long-term fiscal savings. Acting now gives us time to generate “co-benefits” for the many climate change adaptation actions we will need to take.

Again, take Ganges village as an example. Plan proactively for the people who are likely coming to Salt Spring in the next several decades, and we have time to not only better protect vulnerable parts of the village but also build a better village. This could see residents in a mix of new affordable and market rate housing in an attractive, protected village core. This leads to saving valuable forested lands from clearing so that their trees can continue to absorb carbon out of the atmosphere into their mass and the surrounding soil.

If we break through barriers to using treated rainwater and grey water for domestic use, we have the makings of a climate solution with multiples of these co-benefits. And with additional people in our village, we could also create a bigger market for shops and services useful year-round to residents — not to mention year-round jobs.

The next question is: How do we get there? At the online meeting, every breakout group praised the value of collaboration — particularly on an issue like climate change, which, like forest fires, doesn’t respect institutional borders.

Repeatedly, representatives from the breakout groups reported many shared concerns and identified opportunities for collaboration. In one discussion, a representative of a leading organization in our community spoke of the need to reduce emissions in an area that also carries with it high financial costs. By the end of the breakout, representatives from other organizations provided valuable information on funding aimed at solving the very problem that was voiced, and offered to collaborate.

This provided the prospect of a classic win-win for emissions reductions and tightening public budgets. The evening ended with the vast majority of attendees seeing the value of climate action collaboration, and keen to participate in the network’s next meeting.

After the release of CAP 2.0 early in the new year, TSS will begin working with islanders on what they can do to tackle climate change, and with members of the network to determine collaborative projects with a high potential to deliver early wins.

In the meantime, TSS just launched its One Cool Island campaign, starting with an appeal for $10,000 by New Year’s Eve to support the launch of the Climate Action Network and public engagement on climate action in 2021.

To become a donor and sign up for Transition Salt Spring’s newsletter, go to transitionsaltspring.com.

The writer is a TSS board member and a co-author of the forthcoming Climate Action Plan 2.0.

Christmas With Scrooge appears online in 2020