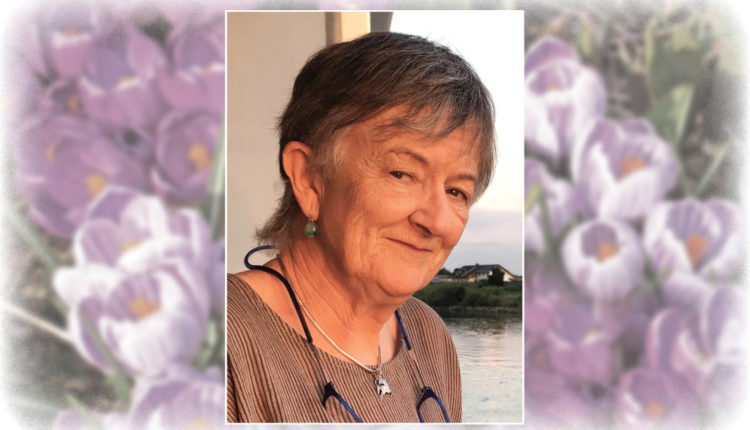 If you knew Sue, then you knew how to laugh. Her quick wit always sent those around her into stitches; right up until her final days, she’d astound friends with her ability to recommend just the right book, or pluck from memory an appropriate (or, perhaps, inappropriate) line of poetry.

Born in Reading, England, Susan Wall was educated by Catholic nuns, who taught her to recite Shakespeare but loathe structure. She trained as a nurse at the Middlesex Hospital in London and later as a midwife at Rotunda Hospital in Dublin, the world’s oldest maternity hospital.

Sue came to Canada in 1967 to work at the Vancouver Children’s Hospital, as part of planned journey around the world. But having found and married the love of her life, fellow British expat Jonathan Yardley (1939-2015), she never left.

Sue and Jonathan moved to the south end of Saltspring Island in 1974 to carve out a life they had always dreamed of: one full of family, friends, festivities and farm animals. Sue was one of the island’s first midwives, attending hundreds of births; she then went onto work “at the other end” as an RN at Greenwoods.

Sue followed her two passions — riding horses and reading — with ferocity and focus, with quite a lot of writing, gardening, travelling and party-throwing thrown in there for good measure. The Yardleys’ door was always open to whomever needed a strong cup of tea, a salmon dinner, or a warm bed (as long as they didn’t mind sharing with a dog or two).

Sue’s other great love was her friends. From weekly potlucks with dear neighbours and monthly meetings with her women’s group, to attending choir with Salt Spring Singers and bunking in beach houses with life-long companions, she found her spark in sharing lively conversations. Her wise (and wise-ass) remarks on everything from religion to geo-politics will be missed.

The Yardleys would like to thank the incredibly compassionate staff at the Lady Minto Hospital for putting up with pizza parties, ponies and puppies. A heartfelt thank you to Dr. Prendiville and Dr. Montalbetti for looking after Sue’s body, mind and soul so diligently throughout a difficult diagnosis. And a huge, all-encompassing hug to this beautiful community, who turned Sue’s illness into a time for reflection, reminiscing and riotous laughter.

A public silent vigil and burial will be held 1-3pm, Friday Oct. 27 at Star of the Sea (Anglican Church) in Fulford.