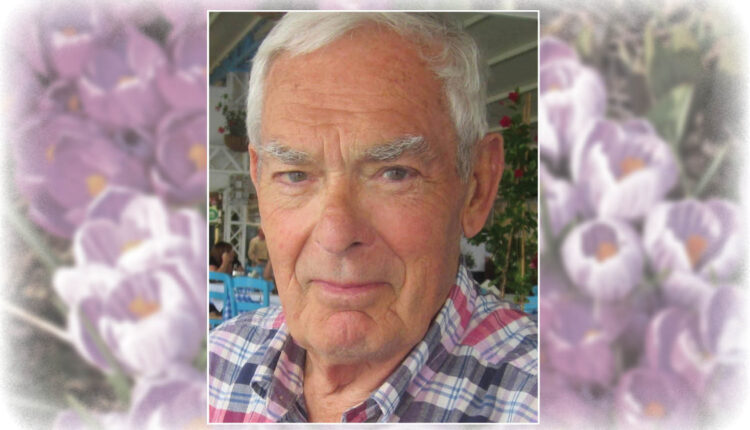 Alan Bellamy Wooldridge was born in Hampton Court, England on February 7, 1934 and died at home on Salt Spring Island on August 12, 2020.

Alan delighted in telling people that he was born at Hampton Court, although admitting it was “on the wrong side of the wall!” He attended Cheadle Hulme school in Cheshire…….following his older brothers John and David. He enjoyed all sports, including playing lacrosse with the English Junior League. During his National Service in Germany, he was connected to the Brigadier General’s command and accompanied him to many top level meetings. Meeting the Queen Mother when she visited her battalion was a firm memory.

He met the love of his life, Margaret (Maggie) in 1954 in Surrey during the Suez Crisis, where much of the courting had to be on bicycles due to fuel rationing. They were married in 1958 and with their two children, Stuart and Jane, came to Canada in 1966. The family first landed in Edmonton, where they embraced Canadian life and formed firm friendships.

Alan started his career with Esso in England and remained with the company until his retirement. He had the natural ability to gather people to take on challenges and after being very involved with Expo 86 he became Imperial Oil’s first environmental specialist and oversaw the remediation of many sites in Vancouver and beyond. A family joke became “Have Mop – will travel.”

Alan is survived by his wife Margaret, his brother Dr. David Wooldridge (Christine) children Jane Carter (Nigel) and Stuart Wooldridge (Michaela), grandchildren Julian (Kate), Evan (Kaitlyn), Brendan, James, and Emma. Nephew Dave Wooldridge had a special place in his heart as did all his extended family.

Alan had a wonderful sense of humour and was a wise man who enjoyed people as much as they enjoyed being in his company. He is sadly and lovingly missed.

The family held a private internment on August 20. A memorial service will be held in the future. In lieu of flowers, please consider a donation to Lady Minto Hospital on Salt Spring Island or a charity of your choice.