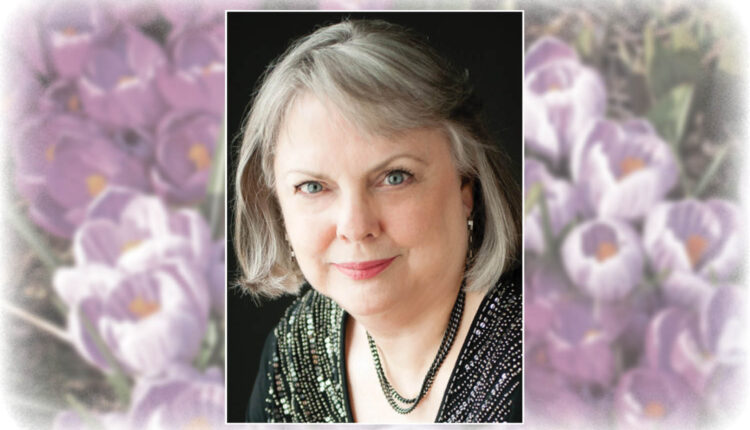 Janet Wheeler
1946 – 2022
Artist, healer, wife, soulmate, friend, mother and proud grandmother, Janet suddenly passed away on January 13th at Victoria General Hospital, with her husband and daughter by her side.

Janet was born in Sheffield, England and grew up in Kent, where she swam for the county. She trained as a teacher and graduated from her college with a distinction. She taught elementary school for many years and then became a teacher of flower arranging, taking part in national and international competitions, and was asked to teach in Russia at the time of perestroika, which she successfully did for three seasons. She developed a love of stitched textile and helped start and run her local Embroiderers Guild branch in the UK, her art continued when she moved to Canada in 2010 and she joined groups in Vancouver and then Salt Spring. She frequently exhibited her work, most recently in the Mahon Hall and the library here and enjoyed working with the many fellow artists in each group. She also valued her work as a healer in the Healing Touch ministry at Vancouver’s Christ Church Cathedral and regretted so much that the on-going pandemic had curtailed this work.

She had just celebrated her 54th wedding anniversary, and is survived by her husband, Simon and their two children, Clare, married to Alec, and Neil, married to Fay, and her three beloved grandchildren, Henry, Rowan and Finley, together with her sister Ann and brother-in-law, Bob.

She loved her cats, baking Victoria sponges and chocolate in any form.

Many, many thanks for all the medical help she received from Dr Paula Ryan and the emergency team at Lady Minto Hospital, including the paramedics and fire personnel who were on site so quickly, plus the Air Ambulance staff and all at Victoria General Hospital. Heartfelt thanks also to our local Beddis community who have provided truly wonderful love and support.

The funeral service was held Janaury 22 at All Saints by the Sea in Ganges, a memorial service will be held at a later date.