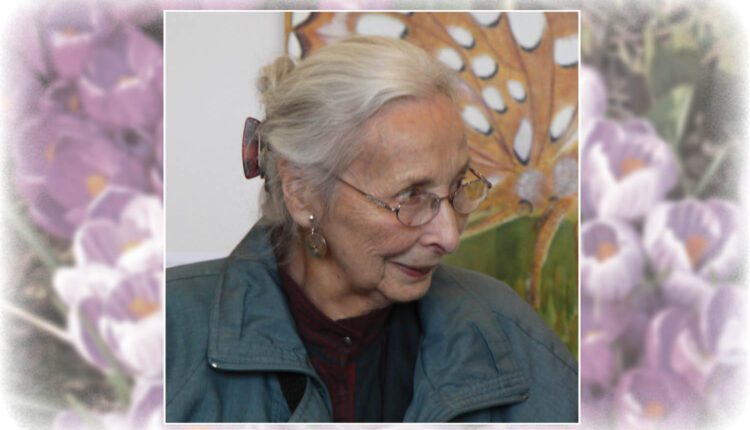 It is with great sadness that we announce the passing of Phyllis Jean Webb on November 11, 2021, at 10 am. She died peacefully, on her own terms, at Lady Minto Hospital in Ganges, Salt Spring Island, British Columbia. “‘I am happy, so happy,’” she said a few days before her death, echoing the last words Gerald Manley Hopkins, one of her favourite poets, spoke as he was dying.

Phyllis was a celebrated and influential writer, admired for her carefully crafted poems, her innovation with form and line, and the unflinching honesty and sharpness of vision through which she wrote about the human condition. Peacock Blue: The Collected Poems of Phyllis Webb (2014), edited by John F. Hulcoop, is a dazzling testament to her masterful use of language and the range of her poetic voice. The main influences on her poetry in her early years may have been male, but she “dispatched” those literary “fathers to the river Lethe,” and began writing, as fellow poet Sharon Thesen put it, in a “female-embodied poetic voice.”

The youngest child of Mary and Alfred Webb, Phyllis was born and raised in Victoria, B.C. She was eager to get off the island as a teenager, and she did so. She lived in London, Paris, San Francisco, Montreal, Edmonton, and Vancouver, yet she ended up spending the last decades of her life closer to home, in Victoria but primarily on Salt Spring Island. She received a BA in English and Philosophy from the University of British Columbia. She was 22 years old when in 1949 she ran as an election candidate for the socialist Co-operative Commonwealth Federation, the youngest person ever in the Commonwealth to seek office. She didn’t win, but she maintained an abiding interest in political and social issues, including the Russian tradition of anarchism, specifically Peter Kropotkin, a figure that inspired some of her poetry. She once called herself “a law-abiding anarchist.”

She worked as a secretary in the 1950s and as a freelancer for CBC. Between 1967 and 1969 she was the executive producer of Ideas, the CBC program she co-founded with William A. Young. Following her freelance work for CBC, she taught poetry in the creative writing programs at the University of British Columbia, the University of Victoria, and the Banff Centre, and was writer-in-residence at the University of Alberta.

When, circa 1990, “words abandoned” her, she put her typewriter aside, henceforth only used for the letters she wrote to friends, and picked up a camera. She created collages out of the photographs she took, the first step toward becoming a self-taught painter. She continued to paint and write letters until her arthritic fingers dictated otherwise. A voracious yet discriminating reader, one of the last things she read was the most recent issue of Brick, a literary magazine that she hadn’t read for a long while but which she specifically asked for. “Still zany,” she told the friend who sent it to her.

Though Phyllis was intensely private, she cherished old and new friends and was a most loyal and caring friend herself. She will be deeply missed by many.

She is survived by her beloved nieces, Starr Webb, Paola Unger, Sarah Webb, and sister-in-law Marianne Webb. Phyllis was predeceased by her brothers Walter and Gerald.

Our sincere thanks to Dr Paula Ryan and the nursing and care staff at Lady Minto Hospital for their care, kindness, and generosity to Phyllis and us all over the last few months.

Following Phyllis’s request, there will be no memorial service. A celebration of her poetry and painting will be planned at a later point.