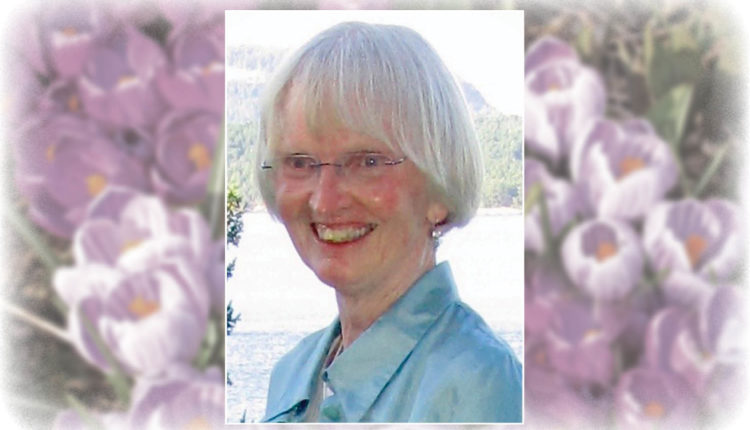 Nancy died on April 1st, 2020, in her own home, surrounded by loving family and friends. She will be profoundly missed for the warmth and company she offered to others over the years.

Born 1938 in Brunswick Maine, where she spent her youth, she later attended the University of Pennsylvania, earning a Bachelor of Science and a Certificate of Physiotherapy. There she met her husband to be, Albert V. Tyler. They married and moved to Canada in 1960, where she pursued a career in physiotherapy. Over the course of the next nine years, while living in Toronto (ON) and St. Andrews (NB), she had three children, Ellen, Jeanne and Paul and worked part time as a physiotherapist.

Leaving the East, she and her husband fulfilled a lifelong dream to live on the West Coast, moving to Oregon in 1974.  In the 1980s, while living in Oregon, Nancy returned to full time work to become an accomplished Physiotherapist, working at King’s Road Physical Therapy and Linn County Home Health Agency. Nancy and Albert, throughout their lives, continued to seek new adventures, eventually landing in Nanaimo on Vancouver Island in 1981. There she practiced physiotherapy at Dufferin Place, the Nanaimo Regional General Hospital’s Long Term Care facility, and Langley Lodge Intermediate Care facility. In 1992 they moved to Fairbanks, Alaska where she worked at the Fairbanks Memorial Hospital.  Over the years she continued her professional training by studying both traditional and non-traditional methods such as the Feldenkrais Method and Therapeutic touch.  In 2000, she returned to British Columbia to retire on Salt Spring Island.

Nancy was an active member of her community, had a keen literary interest, and enjoyed the outdoors. She played the piano and taught both of her daughters to play as well, and music always played in the house. On Saltspring Island, she joined the trail and nature club, knitting and book clubs, took guitar lessons, and continued her 20 plus year practice of Tai Chi.  She also enjoyed time with her husband traveling and exploring places she’d never seen, such as Italy and Scotland. After her husband died in 2005, Nancy revealed an inner strength that amazed everyone who knew her. Even after a diagnosis of Parkinson’s Disease in 2009, she lived independently and continued with traveling and interests for another eleven years.

Throughout her life Nancy maintained her Maine independent spirit, making her own choices about her life.  Known by her family as “the healer,” her children frequently relied on her to treat their own various physical aches and pains, as well as emotional ones. She was an exceptional listener, with remarkable insight into others, and always provided combination of positive encouragement and sound advice. She will be remembered as a welcoming host with whom people felt comfortable to be themselves. Her irreplaceable presence will be profoundly missed and always felt, by both her family and her community. Nancy made the world a better place than she found it.

Nancy Tyler is survived by her daughter Ellen and husband Halfdan; daughter Jeanne and husband Patrick, son Paul and wife Jacquie, and her grandchildren Mikael, Hildur, Aidan and Sophia, her sisters Dawn, Dorothy and Cathy and her sister-in-law Roberta.

Due to the present health crisis, her memorial will be postponed until such a time people can gather to celebrate her life.
Donations in her name can be made to Parkinson’s Canada (https://www.parkinson.ca), The Salt Spring Conservancy  (https://saltspringconservancy.ca) or The Writer’s Trust of Canada (https://www.writerstrust.com).

From her list of favourite songs, Morning has Broken by
Cat Stevens:

Mine is the sunlight
Mine is the morning
Born of the one light Eden saw play
Praise with elation, praise every morning
God’s recreation of the new day