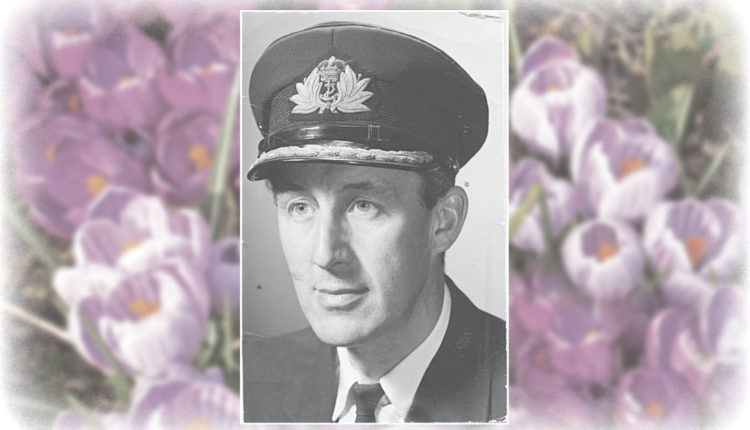 Ian was born in Newton Le Willows UK.  He attended Manchester Grammar school, and then on to Southampton School of Navigation.  Ian spent a short time in the British merchant navy before immigrating to Canada in 1953. Dad met mom on a blind date, and promptly advised her by the third time …“I am going to court you to the alter” – that wedding took place Remembrance Day 1954. Ian worked for the Canadian Pacific Railway (CPR) for a time before leaving to join the Canadian Navy from June 1959 to May 1976.  During his time in the navy he was “on loan” to the province to Master the replica of the SS Beaver for the 1967/68 Centennial Celebrations (one of the highlights of his career). Ian also enjoyed his time as Master of the hydrofoil HMCS Bras d’Or (the fastest unarmed war ship in the world at that time) ending May 1972.

In January 1976 he was awarded the Order of Military Merit (OMM) by then Governor General Jules Léger. After retiring from the Navy, Ian worked as Master for a short time on the Pandora ll research vessel with The Institute of Ocean Sciences in Pat Bay. He moved the family to Salt Spring Island to work as a Master with BC Ferries.  After Ian retired from BC Ferries in 1986, he taught navigation at Camosun College, and was a Master with the Oak Bay Marine Group up in Langara. Ian finally stopped working on the sea and began valiant efforts to be a farmer.  With his index finger pointing, and telling those in the field “he would have their guts for a necktie”, a farmer he was not.  Ian was one of the fortunate ones to live a long life (living in extended care for almost 3yrs) with the last 8 months a steady decline.  Dad’s end came quickly; with a change in his breathing and mom by his side, it all stopped, quietly and peacefully – no stress; you couldn’t ask for better.

The family would like to thank Dr. Butcher for all his medical care, the Care Aids and Nurses in the Extended Care Unit and hospital – your care for our father/husband was a comfort and blessing.  To Jenny Pickering, you kept me (Cydney) in order and we loved that it was you with mom and dad at the end. Thank you also to Christie at Haywards Funeral home for your support and guidance. Dad leaves his wife of almost 65 years June Sturgess, his son Leigh (wife Julie), son Jeffrey(wife Susan), daughter Cydney (husband Don), grandsons Jason and Aaryn Funk, Zackery Sturgess, step granddaughters Tami Funk, Ashley McNaughton, and step grandson Wally Funk and their families.  There will be no funeral service at dad’s request. The family will have a private burial at sea.  Bye Sturge!