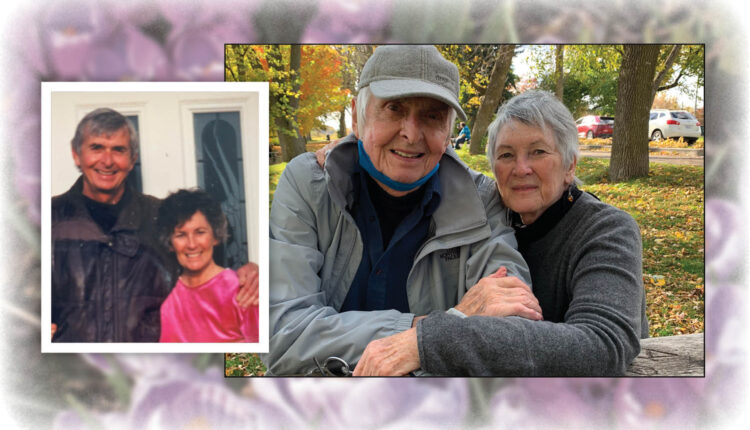 Tony Smith, born and raised in Paris, ON, graduated from Queen’s University, Chemical Engineering, under the Regular Officer Training Program with the Canadian Armed Forces. His three years of serving were spent flying fighter jets in Europe, based in France.

Marlene Smith, born Marlene Charko in Winnipeg, MB, daughter of an Air Force Officer, lived in many different places. They were stationed in France when she turned 18.

And at 18, Marlene attended her first Officer’s Ball. Tony took one look at her and followed his heart …they were married October 28, 1961, and were blessed with their son, Don, 1962, and daughter, Rhonda, 1963. The family settled in Newmarket, ON, for 25 years.

Marlene loved to organize and volunteer. In Newmarket, she founded the Newmarket Crafters and Newmarket Hospice. On Salts Spring, she spearheaded the arts activities for Salt Spring Island’s Millennium Project and was part of the Salt Spring Arts Council, a supporter of SSNAP, and an active member of the Federation of Canadian Artists. Marlene was incredibly artistic. She had a fine arts degree. She designed a line of silk screened clothes and created a variety of beautiful porcelain and clay pottery, paper mould sculptures and paintings.

In Newmarket, Tony channelled his intellect, gentle nature and sense of humour into teaching seniors chemistry and physics at Bayview SS, becoming a favourite teacher at the school. He loved speed, loving to fly fighter jets, ski and sail. He loved being physical, playing squash, practicing yoga and was an active member of the Salt Spring Trail and Nature Club. He volunteered with the Roscommon Strata and Salt Spring Search and Rescue.

Tony and Marlene thought about and experienced life outside the mainstream – e.g. forty years ago, they were healing themselves with homeopathy, Jungian therapy, and massage. They opened to their spirituality in a variety of ways – e.g. meditation, kundalini dancing, and time in nature. They were both avid readers, fiction and non fiction. They loved music and dancing. And, they grew and loved to smoke the “herb” … Tony earning the nickname, “Mr. Green”.

Their Georgian Bay island cottage, built by Tony, was their favourite place. Besides swimming, sun worshipping, and spending time with extended family, they loved to explore the Bay together, heading off for the day in their Albacore sailboat, “The High Flyer”. Later, it was mainly at the cottage where they spent time with their grandchildren, both being wonderfully creative and loving grandparents.

They lived in Ganges for 23 years. They loved the Salt Spring community and natural environment. They loved to entertain their friends, working together to create wonderful meals. One year, they purchased warm socks and handed them out to those in need.

In November 2019, they moved from BC to Guelph, ON, to be close to their daughter. In June 2021, Marlene was diagnosed with pancreatic cancer. She spent her final months looking after her beloved husband, finishing a few paintings, and enjoying time with daughter and family. She was able to celebrate their 60th anniversary. Marlene chose a medically assisted death (MAiD) and passed away, with courage and Grace, at Rhonda’s home on November 20, 2021.

Tony continued to live with Rhonda and family, gently fitting his routine into their life. He quietly grieved the loss of his beloved wife, and two months after her death, he followed his heart once again …passing away on January 21, 2022, with his daughter by his side.

Tony and Marlene will be deeply and forever missed by their cherished family and friends.