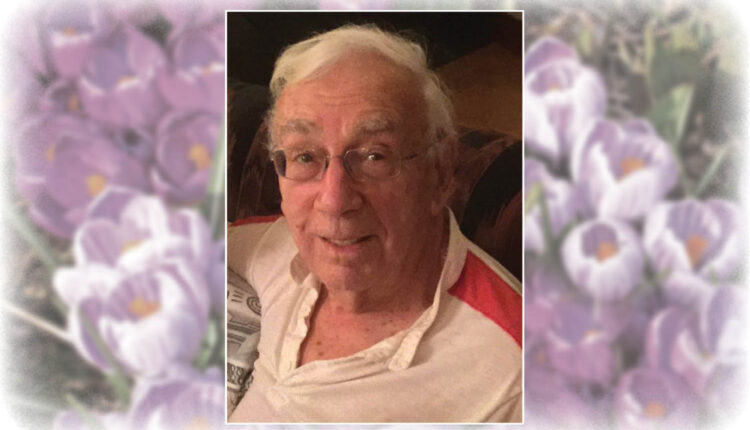 It is with sadness and broken hearts that we share the news of Ed’s passing December 28, a few days into his 95th year. Ed is remembered lovingly and will be missed tremendously by his wife of 69 years, Lucy; daughter Suzan; son-in-law Bob; granddaughters Katie and Laura. Ed and Lucy’s son Eddy-Mark died in1982 at the young age of 25 years.

Ed was born in Edmonton Alberta to immigrant parents of Ukrainian heritage. His father died when Ed was a very young child. Ed’s only memory of his father was holding his father’s hand as they waited for a bowl of soup in a Salvation Army Soup line. Ed grew up in poverty and although his early years were difficult, Ed ultimately had a very long, rich and happy life full of wonderful and exciting experiences.

Ed and Lucy married in 1952. They were a fun-loving couple, lifelong partners and a team right to the very end. They laughed every day and always treated each other with affection, kindness and respect.

Ed was a successful businessman, land developer, realtor and real estate appraiser. Together, Ed and Lucy built a very successful business that became one of the largest appraisal companies in Western Canada. Ed was highly respected by his peers and the legal community. His work as an appraiser was recognized throughout North America.

Ed was a highly accomplished trapshooter and Olympian, competing in the 1969 Olympics in Mexico City. He blazed the trail for Canada’s Olympic trapshooting team and was recognized by the Shooting Federation of Canada for his outstanding contributions to the sport of trapshooting in Canada. He was Coach of the Canadian Olympic Trapshooting Team and took the team to the Olympics in Los Angeles (1984), Seoul (1988), and Barcelona (1992). Ed was also the coach for the Olympics in Moscow (1980). Ed was a gold medalist in several Provincial, Canadian and World Trapshooting Championships.

Ed and Lucy retired to Salt Spring Island 34 years ago. Ed absolutely loved Salt Spring and their community of friends and neighbours. In his retirement Ed followed his passion for fishing and enjoyed many early mornings on his boat with friends and family. Ed and Lucy enjoyed gardening, and together created a vegetable garden and small orchard. Ed was a master award-winning carver. While retired he focused on his wood carving, mentoring other carvers, and gifting his carvings of birds to charities, friends, and family.

Ed loved his granddaughters beyond words and was very proud of Katie and Laura. Ed was a devoted grandfather who loved to spend time playing crib with Katie and Laura, making Caesar salad with Laura, and sharing stories about his life. Ed taught Katie and Laura how to fish, sharing his wisdom, problem solving and patience required to bring in the big catch. Ed named his Boston Whaler “Katie Laura” and was always so proud to introduce the namesakes of “Katie Laura” to his fishing and boating friends.

Ed became independent at a very early age, and his determination to remain independent and self-sufficient was evident throughout his entire life. He was a kind and generous gentleman who over the years shared his life experiences, lessons and wisdom with his children and grandchildren. He was a very hard-working man, and it was important to him that he succeed with each task he was challenged with. He was an analytic and critical thinker that allowed him to solve problems with ease. Ed was a risk taker and was not afraid of any challenge presented to him. He was competitive with himself and others, and was very proud of his life achievements. He was always optimistic about life and recognized the good in everyone. Ed will be remembered for his sense of humour, kindness, generosity, loyalty, and an exceptional life well lived.

The family would like to express their thanks and gratitude to the multitude of people who provided care, support and compassion during Ed’s difficult journey. Our heartfelt thanks go to Dr. Ronald Reznick, Jean and Margaret, Island Health Palliative Support Team (Jan, You Yau, Elizabeth), Anastasia and all Home Care Support Workers, Selene and staff at NexGen Hearing, and all staff on the Acute Care Unit Lady Minto Hospital, Salt Spring Island. Finally, enough cannot be said about the tremendous support given to Ed and Lucy by their very close and dear neighbours and friends.

A private family funeral will be held in the future.

In lieu of flowers, donations to the Salvation Army in memory of Edward John Shaske would be appreciated.

To view Ed’s obituary in its entirety, please go to https://www.haywardsfuneral.ca/obituary/edward-shaske/