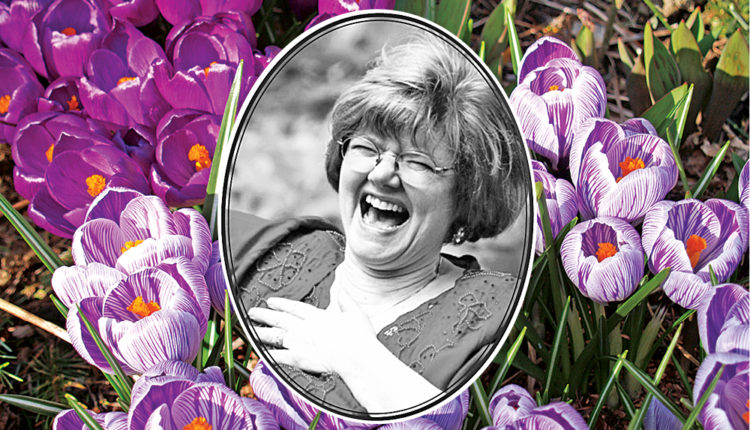 She is survived by her husband, Dennis Andrews; her children; Jackie Wilson of Queen Charlotte, Tess Daglish (Gary) of North Vancouver, Rick Andrews (Christy) and Jack Andrews (Iris) of Salt Spring, and Michelle MacConnachie (Cal) from Surrey; also by seven grandchildren, Richard, Jordan, Kirsten, Steven, Larissa, Mariah, and Brock; and two great-grandchildren, Gordie and KadyBug. She is survived by her sister Susan of Summerland and her older brother, Andy (Claudia) of Ladysmith, as well as her nieces and nephews; Sheryl, David, Lonnie, Kathy, Kenny, Sam, Angie and Duncan. She is also survived by Tess’s father, Erwin Roth (Miyako) from Haida Gwaii. She was predeceased by her youngest brother Bob, youngest sister, Holly and by Jackie’s dad, Rick Wilson (Gloria) of Enderby.

Linda’s life had a few rather emotional twists and turns. She graduated with honours from Penticton high school, attended UBC for six weeks, and in the throes of home-sickness quit and got married. Four years later, and now a single parent, Linda made another stab at university. She knew that with one year under her belt she could get a teaching job and complete the rest of her degree through summer school. So, in 1965, choosing the Charlottes as the most exciting place she could work and still support her daughter, Jackie, she borrowed her brother’s motor bike and headed north on the Skeena Prince.

Along with many other adventures, she met Erwin, the singing house painter. She taught one year, attended one summer school, got married again, and had her second daughter, Tess. She taught a second, rather tumultuous year, quit teaching, and bought the local clothing store, Charlisle, which Jackie still runs 45 years later.

After another dramatic life crisis, Linda moved to Salt Spring and married Dennis. They bought Carolee’s, renamed it ‘Country Casuals’ and ran it for five years until she decided on a slower pace in her life. She continued buying for the original store in the Charlottes and managing the financial side of the business until developing heart problems. After that, she phased out the buying and in 2016, when diagnosed with cancer, finally turned the finances over to Tess.

Her focus was not all business and she made a conscious effort to maintain a close relationship with her grandchildren. Along with frequent trips to the Charlottes, and annual swimming lessons on Salt Spring, she delighted in mailing them their Christmas stockings, Easter baskets and Halloween treats.

She also picked up a few hobbies along the way. She took up golfing because Dennis was so good at it, and wished she had started 30 years earlier. She loved to paint and became the family photographer, archiving each years events with a laboriously created slide show tucked inside each Christmas stocking. She had finally learned the lesson that it is the little things in life that matter…..

A Celebration of Her Life was held in Saltspring Island on June 11, 2017.

Linda’s family is hoping to have a small celebration in 2018 on Haida Gwaii to unveil a Memorial Bench in her honour.