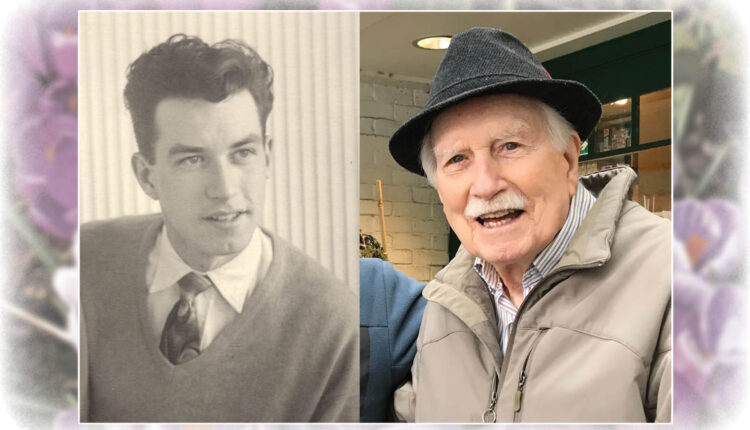 Alan Robertson was born on July 10, 1928 at Grace Hospital in Vancouver. Along with his older brother Donald and younger sisters Margaret and Joan, he grew up in Vancouver, West Vancouver, Vernon, and Nanaimo.

Alan was involved in Boy Scouts Canada for decades, starting out as a young Cub in the mid-1930s and finishing in his early forties as District Commissioner for West Vancouver in the late 1960s. He was well-suited for this organization as he loved learning, teaching, comradeship, and always the outdoors. Plus, he looked great in short pants. After graduating from Nanaimo’s John Shaw High School in 1946, Alan studied commerce at UBC but ultimately realized this was not his calling. By way of response, he and a buddy set off to explore western Canada. They worked construction, hitchhiked around BC, rode the freight rails to Calgary, and caught a rough flight to Yellowknife where they dug sewer and water lines to finance their way back to Vancouver.

In 1949, Alan was offered a position in the engineering department of F. Drexel Co., an industrial supply firm. Here is where his young life took a dramatic turn. One day in 1951 he observed at the front desk a pretty young woman who had arrived to interview for a secretarial job. He quickly phoned down to his office manager and said, “Hire this one, Dunc.” And Dunc did. An office romance followed, and at Christmas—much to the delight of the office staff—the engagement of Alan Robertson and Rita Wheeler was proudly announced.

Alan and Rita were married at St. Mark’s Anglican Church in Kitsilano in May of 1952. Alan’s work took them north to Prince George, and there they began their new life together. They returned to Vancouver in 1954 with their firstborn, Christine, and subsequently had two more children, Gordon and Kathleen. In 1962 the family moved to West Vancouver. In his professional life, Alan worked as a draughtsman at Columbia Engineering (1955–1957), and draughtsman/project manager at Permasteel Engineering (1957–1985) and McGuire Engineering (1985–1990).

Alan’s adventurous spirit and curiosity about the world led him and Rita to take many wonderful trips: Britain, Europe, Cuba, the US, and across Canada. Family vacations with their children, however, can be summed up in one word: camping. Throughout the 1960s Alan and family camped extensively in B.C. and twice down the Pacific coast to California. Camping. Always camping. Leave it to Al Robertson to find a campsite in the city of Los Angeles. Now that took some scouting.

Being involved in his church community was a steadfast theme throughout Alan’s life. In West Vancouver he dedicated himself to St. Stephen’s Anglican Church. He served as People’s Warden and sang in the choir for many years. His love of singing and beautiful bass voice is something that his friends and family will always remember about him. Upon retirement in 1990 Alan and Rita moved to Salt Spring Island, where they were warmly welcomed by the parish of All Saints by-the-Sea. Here, Alan’s draughting and management skills were invaluable in the major project of moving and reconstructing the church. He cherished this project, and it remained a point of great pride for him.

On Salt Spring Island, in the warmth of their parish family, Alan and Rita found a community they were to love for over thirty years. Here, music continued to be a passion in Alan’s life as he joined the Salt Spring Singers, Lost Chords, Salt Spring Quartet, and All Saints’ Church Choir. He delighted in the Trail and Nature Club and Scottish Country Dancing, where he not only danced but also regularly sang The Star of Robbie Burns at the annual Robbie Burns banquet. Alan’s kindness and big heart led him to years of community service: Meals on Wheels, Soup’s On, Choices/Special Olympics, Ometepe Coffee, Greenwoods’ singalongs, Music and Munch, and more.

A man of many interests and talents, Alan took great pleasure in such activities as gardening (he grew vegetables wherever he had a little land), sketching (his delightful posters and cartoons were legendary), and keeping fit (countless tennis matches on the courts of West Van). He was a great supporter of the arts, especially theatre, and was keenly interested in politics, world affairs, the environment, and soccer.

In the past year, Alan found another community in the loving care of the staff at Greenwoods Eldercare. The care aides, nurses, residents and management fully embraced him as he did them, in mutual love and respect. He found meaningful connections and blessed comfort in the care of those who helped him navigate the last months of his life. The Robertson family would like to express their deepest gratitude to Greenwoods, and to Marjie and Brock Radford, for bringing joy to Alan time and again this past year.

A memorial service will be held at All Saints by-the-Sea Anglican Church on Friday, May 6 at 2:30 pm. In lieu of flowers, donations may be made to Greenwoods Eldercare Society or Salt Spring Island Community Services.