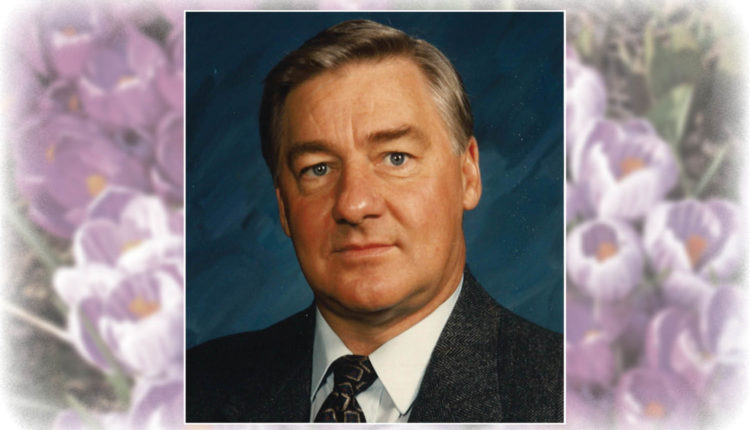 It is with profound sadness that the family of Earle Robertson announce his accidental death on February 3, 2018. He is lovingly remembered by his wife of 53 years, Sharon; daughter Terese (Michael) de Carle, Calgary AB; son Steven (Kristen) and precious granddaughter Kayella Robertson; brother Robert (Maureen) Richmond, BC and family; sisters-in-law Vera and Marilyn Robertson; and numerous nieces and nephews. Earle was predeceased by his mother Louella, sister Donna Hnatiw, brothers Gordon, Kenneth and Gerry; and in-laws Steven and Jean Maradyn. Earle was born in Prince Albert, SK on November 22, 1941. Upon moving to Saskatoon, he attended Caswell School and Bedford Road Collegiate. After graduating Earle was accepted into the Regular Officer’s Training Plan in the Royal Canadian Air Force. His military training included study at the University of Saskatchewan, where he received a B.A. and B.A. Honours in Physics. As an engineering officer he was posted in North Bay, ON, Saint Jean and Senneterre, QC, and he received an honourable discharge from the military as a Flight Lieutenant. Earle returned to the U of S completing his B.Ed. He then joined the Saskatoon Public Board of Education as a physics and mathematics teacher at Bedford Road and then Evan Hardy. In 1975 he won the Hilroy Fellowship for “An Alternatives Approach to Teaching Physics”. He served as vice-principal of Evan Hardy, assistant principal of Walter Murray and Mount Royal and principal of Bedford Road and Aden Bowman Collegiates. In 1980, as Acting Superintendent of Secondary Schools, he developed the first ever “Educational Plan for a New High School” that was Marion Graham Collegiate. In 1984 Earle chose to return to his first love, the teaching of Physics and Math and taught at Marion Graham for 16 years. Earle was very active in the Saskatoon Teacher’s Association where he served as councillor, executive member, vice-president and executive assistant. He was on the Stirling McDowell Foundation Board, later becoming a consultant for this board. He was a member of the Board of Directors for both the Teacher’s Credit Union and Science West. In 2002, the Saskatchewan Science Teacher’s Society honored Earle with an award for “Dedication to Science Education”. In 2005, he was the recipient of the Arbos Award for Contributions to Education and the Teaching Profession. Earle’s students often expressed their gratitude for his dedication and efforts to help them succeed in their academic endeavours. Earle’s final teaching assignment was instructor in the Adult Academic Education program at Saskatchewan Polytechnic. In Earle’s own words: “It is with deep gratitude and pride that I can say unequivocally that I would do it all again.” Earle was an ardent fisherman, an avid reader, enjoyed gardening and collecting rocks and pinecones on his daily walks. He had a keen sense of humour, a twinkle in his eye and a ready smile. He also always had an answer. Earle had a positive attitude throughout life and always stated he was a happy man. Earle truly loved his family. He married his high school sweetheart Sharon Maradyn, August 8, 1964. They were blessed with two children Terese and Steven and were delighted to welcome son-in-law Michael and daughter-in-law Kristen into their family. They were further blessed and overjoyed with the birth of their granddaughter Kayella Robertson. Earle and Sharon loved family get-togethers and visiting with friends, eating out and travelling. Earle’s favourite spots of destination were Hawaii, Saltspring Island and Waskesiu. He will be dearly missed and forever in our hearts. The family wishes to thank Dr. Cyprian Enweani for his care and friendship and the doctors and staff of the ICU at Royal University Hospital for their care and compassion. The family also extends a heartfelt thank you to everyone for their overwhelming support during this time. A Life Celebration for Earle will take place at the Sheraton Cavalier Hotel on Friday, June 22, 2018 at 2:00 p.m. followed by a reception. Condolences may be left for the family at www.saskatoonfuneralhome.com. Arrangements have been entrusted to Saskatoon Funeral Home 306-244-5577