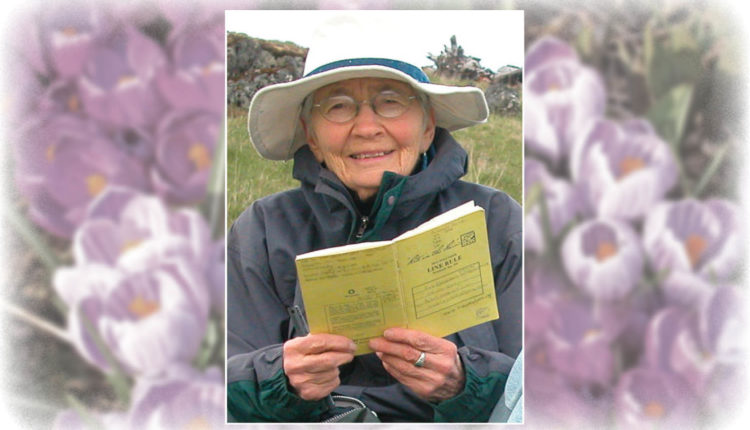 Ann was born in Detroit, Michigan, where she spent her early years. She earned a BA in Social Work at the University of Michigan in Ann Arbor. After graduating from college, she served as a Medic in the US Navy and as an Executive Director of Girl Scouts USA in a Detroit chapter of the organization.  Ann was an excellent administrator and membership almost tripled under her leadership. She also developed a successful outdoor camping programme. She left the scouting organization in 1963 to complete a Ph.D. in Social Work at the University of Pennsylvania and subsequently held a teaching position as Professor of Social Work at Wayne State University in Detroit. During this time, Ann, an avid sailor, spent many happy hours sailing on nearby lakes.

At age 50, Ann decided to change her life.  She spent a lengthy time in retreat at the International Meditation Center in Barre, Massachusetts, a  meditation center she returned to many times throughout the rest of her life. She bought a VW camper van, and a Coleman stove and embarked on a solitary odyssey to Alaska. There she worked with Native Bands in the southeastern part of the state. She took up flying and passed her private pilot’s license exam, and then enjoyed all of the outdoor activities Alaska offers throughout the seasons.

During that time Ann stopped to visit a friend on Salt Spring Island and fell in love with the island.  She sold her land in Alaska and with friends Sharon McCollough and Maureen Bendick, jointly purchased a lot on Upper Ganges Road, where she hand-built a pole house. At that time she became a proud Canadian citizen. Later they bought acreage on Ford Lake. After remodeling an historic cabin, she kept several sheep and established a vegetable garden. Her potatoes won a ribbon at the Fall Fair. She also did her own vehicle repairs. On any given sunny afternoon, she could be found sitting cross-legged next to her blue camper, reading the manual on how, for example, to repack the brakes. She also commuted to Duncan where she worked as a Provincial Social Worker in a mental health clinic and did counselling for the local community center. Later, Ann purchased her last property, a Paul Burke hand-made house on King Road.

Ann brought her prodigious intelligence to numerous Salt Spring endeavours including Voice of Women.  She was a founding member of the Salt Spring Vipassana Group and became an active participant in the Island’s Buddhist community. This and her yoga practice sustained her through the years.

Ann loved to sing. Because of her early years in the Girl Scouts she would sing traditional camp songs and rounds such as “Fires Burning” or “Dona Nobis Pacem”.  In later years these got intermixed with three-part harmony and rousing renditions of “Country Roads”, “Delta Dawn” and the classic barbershop rendition “Molly Malone”. She also played recorder and the flute in an island early music group.

Ann was an enthusiastic sailor and kayaker, water colourist, devoted naturalist and avid birder. She kept meticulous notes of bird sightings and, with specialized equipment, recorded many hours of bird sounds that she sent to the Cornell Ornithology Laboratory.

In 1994 her interest in the natural world led her to join the steering committee that ultimately created the Salt Spring Island Conservancy.  Ann was instrumental in establishing the Conservancy as a viable legal entity. She helped to research and write the Conservancy’s Constitution and successfully applied for society status for the organization, making SSIC the third legally approved Conservancy in the province.  She also applied for the Conservancy’s Conservation Covenant Status and in 1997 successfully registered the first covenant on private land on the island. She later placed a covenant on her own land on King Road, thereby protecting three endangered species on the property. She continued to serve for many years on the Conservancy Board, helping to write conservation grants and working to establish conservation stewardship guidelines.

Ann was fortunate to be able to spend the last nine years of her life in Greenwoods where she received incredibly good care. The Staff in all departments were professionally competent while always extending the extra personal dimension to the relationship. It was clear how much they truly cared, which was a special blessing to her and to those of us who loved her.

Ann is remembered by her niece Jane Leonard of Ann Arbor, Michigan and her many friends on Salt Spring Island, especially Rosamund Dupuy.  In particular, Sharon McCollough and Maureen Milburn wish to thank Dr. Crichton for his many years of excellent medical attention and thoughtful care; Dr. Crichton’s office for their assistance; Sandi Muller, who won Ann’s respect and trust during her six years at Heritage Place Senior’s Home, and the staff of Greenwoods Long Term Care Facility for their kindness and compassion. Our special appreciation to Christie at Haywards for facilitating personalized arrangements that honoured Ann’s spiritual and environmental practices. To Lama Shenpin, we are grateful, as well as to Heather Martin and the Buddhist community of Salt Spring for continuing to hold Ann in their hearts.

To Ann’s caregivers throughout the years, particularly Geraldine Lewandowski, for her gentle care over five years, we extend our sincerest thanks. Our deepest gratitude to Jean Brown who for 15 years was Ann’s professional caregiver and compassionate companion who gave physical and emotional comfort and a genuine friendship.   Jean understood Ann’s Alzheimer’s affliction and she had the knowledge and patience to maintain an unwavering connection with the authentic Ann, the unique woman struggling with the disease.

A celebration of life for Ann will take place this spring. Donations in Ann’s memory may be made to Greenwoods Eldercare Society or the Salt Spring Island Conservancy.

To Ann, life was an incredibly complex, exciting journey and she welcomed intellectual, physical and spiritual challenges. Our Ann lived an unusually varied life and she did, indeed, have a great ride!