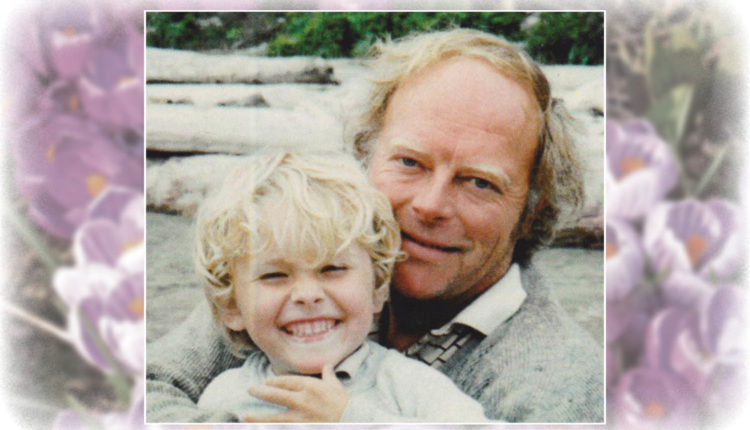 Allan was born in Victoria B.C. His father was in the Canadian Air Force so he grew up at several bases across Canada, including Tofino BC, Whitehorse Yukon, and Chatham New Brunswick.

In New Brunswick he became an Air Cadet and later went through university in the ROTP program. He received a Pilot Officer commission in 1966. After graduating from UVIC with a degree in Math and Physics he did not pursue an Air Force career and became a Physics lab instructor. He met his future wife, Kathy Rauchert, in the line up at the UVIC graduation ceremony. They were married in 1972.

When the university closed for the summer, he went scuba diving, surfing at Long Beach, and fishing. Within a few years he answered the call of the sea and forgot about working ashore.

His first boat was a tiny west coast troller, the Jibbs. Two other small trollers he fished with belonged to Henry Nolla of Tofino and Alex Mulholland of Ladysmith. They all became lifetime friends. In 1973 Al and Henry, who was a Tofino artist, purchased the 86 ft. old sardine packer, the Pride of Fundy, on Grand Manan Island NB, and sailed her home through the Panama Canal. They used the boat for fishing tuna and halibut and then later as a fish packer and cash buyer.

The Reimers moved to Salt Spring Island in 1979, and quickly became part of the island’s dynamic maritime community. Their boat joined an iconic fishing fleet, including the Annie Tuck, the Pacific Prowler, Lady Patricia, Miss Universe, the Crazy Horse, and the Salty Isle.

In the summer of 1985, The Pride of Fundy, with a full load of 50 tons of Sockeye Salmon from Rivers Inlet, struck a rock in the night, just off Port Hardy. The crew survived but the boat could not be salvaged intact. Instead, the shoreline was gradually covered with tons of rotting salmon much to the disgust of the local residents.

Al’s next boat was the Pescadero, a bowpicker gillnetter, he built in 1986. After that he had many happy years at sea with his deckhand nephew, Byron. He fished along side local legends like bowpickers Billy Hitchcock, Pat Fraser and Ray and Arnie Hengstler. Some of his happiest fishing times also were off San Juan and the Nitinat Bar, with his friend Carl on the Silver Surfer.

As the salmon openings became few and far between he purchased a share in a classic old wooden troller turned crab boat, the Pride and Joy. For a few years he also fished king crab in the Portland Canal area, north of Prince Rupert along the Alaska border. When the salmon fishing declined, in the late 1990s, he sold his licences and boats and retired from the fishing industry.

After retiring Al kept busy caring for his family. He spent a lot of time with his parents and built a house for his aunt, after all of them had moved to Salt Spring Island. He saw his son James through years of medical care including two double lung transplants. Despite some good times playing pool at the Legion, and taking a memorable trip to Europe with his friend and scrabble partner, Sam Bawlf, retirement was not easy for Allan. He suffered two strokes, first in 1996 and again in 2011, after which he endured 9 years in extended care – long enough to see his son married to Adena and to meet his precious granddaughter Lilah Joan.

Allan was predeceased by his beloved daughter Laura Jane (1982), his parents Ed and Vivian, and his wonderful uncle and aunt, Don and Irene Roper. He is survived by his wife Kathy, son James (Adena), amazing granddaughter Lilah Joan, favorite nephew Byron Nutton, and cousin Ron Sangster (Linda). He also has many in-laws and Reimer cousins as well as dozens of good friends along the coast.

A memorial will be held later, when it is safe to do so, at the Royal Canadian Legion, Salt Spring Island.

Donations in memory of Allan can be made to the Canadian Cystic Fibrosis  Foundation or to the Island Stream and Salmon Enhancement Society.

“It’s those times ashore that kill a man, not his days at sea”