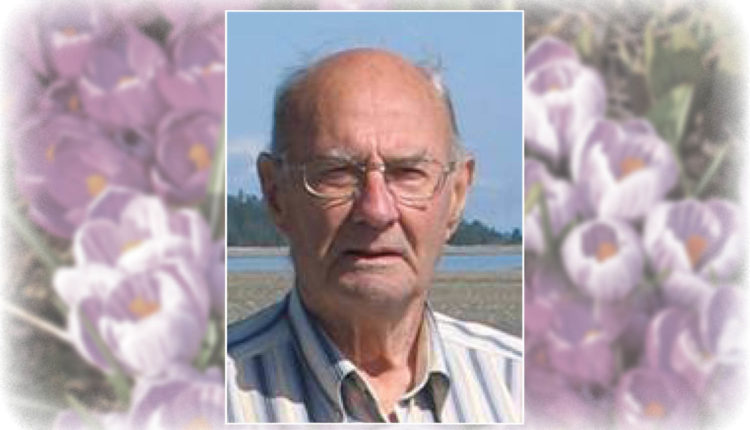 Raymond, at a great age of 96 years old, passed away peacefully of old age at Greenwoods on Saltspring Island. Cremation followed by a private ceremony will be held in the near future.

Raymond was born in Caterham Sussex, England. He was predeceased by his brother Michael and his sister June, and is survived by his sons John (Julie) and David (Laura), his grandchildren Jamie, James, Ben and Will, and his nieces Helen Hutton, Marilyn Perks, Clarissa Bass-Davies, and his nephew Jonathon Jepson.

Raymond lived an interesting life – he served on a red cross boat in the English channel during WW2 and survived multiple gun shots and the boat sinking, followed by then cutting-edge surgery, rehabilitation, and a year-long recovery. He then started a small business cultivating and breeding new varieties of daffodils in England. In the late mid -1950s he moved to Vancouver Island and held various jobs including a school custodian and a fisheries inspector before starting up the Orange Box, and later, with his wife Elsy Mary Perks (nee Price), Perks Florist and Nursery in Victoria while raising his family. His family have many fond memories of month long family adventures, first on Joda (25’ sailboat) and then Mangarava (30’ sailboat) exploring the entire length of the east coast of Vancouver Island.

Heartfelt thanks to Greenwoods Elder Care Society’s magnificent staff for their wonderful care of Raymond, first at Braehaven, and then at Greenwoods (a special thanks to Lisa) – their care and kindness made Raymond’s last days peaceful.

Donations to The Greenwoods Eldercare Society in memory of Raymond would be appreciated by the family.