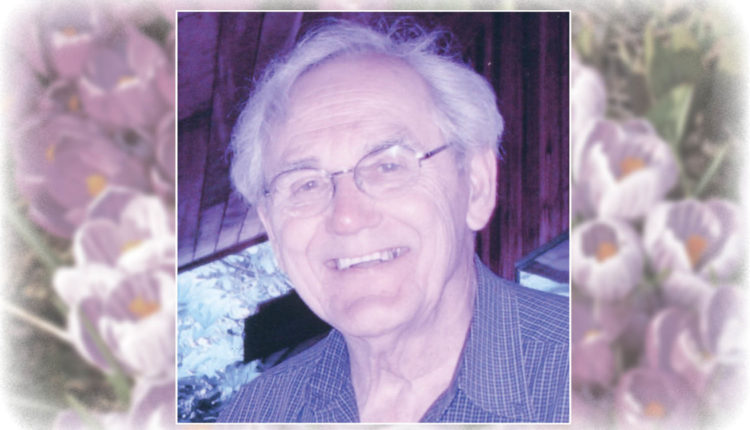 Alex died peacefully in Lady Minto hospital following hip surgery at the Royal Jubilee. He was born in Sandilands, Manitoba, the seventh of eight children. He is survived by his wife of 59 years, Victoria
(Mosquin), nieces and nephews. Alex was predeceased by his father Jacob, mother Frances (Monastyrski), ﬁve brothers, Peter, Paul, Roman, Sam, Michael, and two sisters, Helen Beyak and Jean Stark.

Sandilands, where Alex attended the one-room school from grades one to eight, is a small village on the C.N. railroad line to the USA. He knew the woods, climbed jack pines, picked wild berries and mushrooms. In winter, with his older brothers, provided rabbit and venison. He attended the local one-room school for grades one to eight, and continued high school in Ste. Anne, Teulon and, in 1946, St. Andrews College in Winnipeg. After cutting pulpwood in bush camps of Ontario and two years plying the Great Lakes shipping iron ore on the Algorail, he decided to go to Edmonton. There, pouring concrete for the city’s curbs, and being on unemployment insurance led him to try long distance trucking. He loved driving the Kenworths and the trips gave him opportunity for quick visits to relatives and friends scattered across Ontario and Manitoba.

At age thirty, he decided to go to university and applied to the U of Alberta. However, he was short his grade twelve English and denied entrance. Application to the U of Manitoba was accepted and he attended summer school there, taking two courses. Here he met Victoria, who was working on her B.A. They married two years later. Al continued trucking for two years and they moved to Manitoba for Al to begin his Science degree. He received his Ph.D. in Mycology in 1972 and stayed with the Botany Department, teaching various courses, including photography, until his retirement from the Faculty of Science in 1993.

The Sandilands Forest Reserve was a favourite destination for mushrooms, photography and picnicking with friends on the old family homestead. He was delighted, one year, to say he had ﬁlled the trunk of the car with morels. Travels to other countries always included visits to Botanical Gardens. As a member of the British Mycological Society, there was the pleasure of roaming the countryside with forays to Italy, Majorca, Spain and Portugal. Al was an adventurous cook, barbecued a great steak, and made noodles for the Sunday chicken soup. He loved New Orleans jazz, his many cameras, small radios, and good tools.

He moved to Salt Spring in September of 1993 looking for shorter winters and a longer tomato growing season. The Garden Club introduced winter vegetables and slugs. Al joined the Farmers Institute and over the years valued the Tuesday mornings working on the buildings and grounds. He was pleased to offer his tools: he had many and often more than one. He could not resist a bargain.

Following the independence of Ukraine, travel was possible and several trips connected him with relatives. He was pleased to be able to support some of them through medicine, the priesthood, computer science and law. Throughout his life, Al maintained friendships and stayed connected with family. To Victoria, he was a best friend and a loving husband.

Cremation has taken place. A Celebration of Life will be held at 2:00 on Wednesday, April 8, at Fulford Seniors, south side of Fulford Hall. Internment will be in Winnipeg at a later date. Donations in his memory may be made to a charity of choice. Thanks to the nurses at Lady Minto and to Dr. Beaver for their wonderful care.

Making the case for a fifth West Coast season