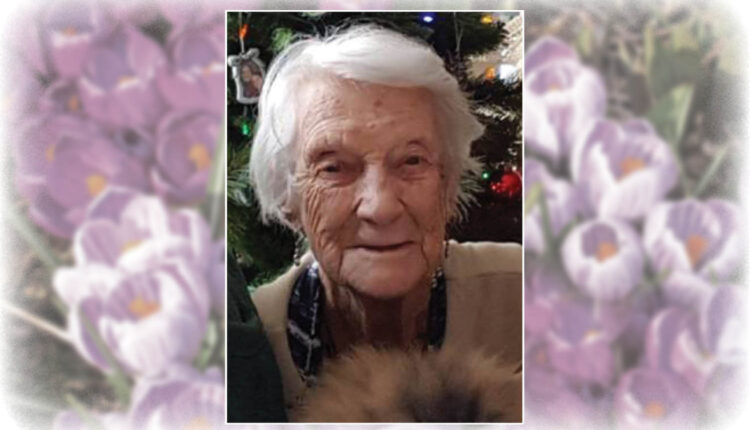 Marjorie Nash (nee Court) passed peacefully in her sleep on Thursday May 19, 2022.

She was born in Portland, Oregon on October 18, 1921 and moved to Hamilton in 1922 where she attended a one room brick school. During WW2 she served in a munitions factory working 12 hour shifts. Her entire family attended St. Paul’s Presbyterian Church and then Chalmers Presbyterian Church where she was married to Nathan Nash in 1949.

That is when her life as a farmer’s wife began on the Nash Farm in Stoney Creek.

Their 4 children, Willard (Rose), Malcolm, Charles (Lynda) and Linda (Jim Gagnon) were the 6th generation to be raised on that same United Empire Loyalist farm.

Raising 4 kids and keeping up a house and helping on the farm kept her very busy but not too busy to serve countless volunteer hours.

Marjorie was a Commissioner for the local Girl Guides for 23 years, school PTA member for 10 years(two as president), United Church Women for 35 years, Boy Scouts Den Mother for 15 years and part of the Womens’ (Farmer) Institute for 30 years when she received a lifetime member pin from the Stoney Creek chapter.

Competitive square dancing was something Marjorie and Nathan both enjoyed and they travelled the world for competitions and just for fun. They even danced on the Great Wall of China!

In 1975 they sold the bulk of the family farm and in 1985 they made the big move West to Salt Spring Island. There they moved in to a house they had designed by their son Charles and built to lockup by a well known local family. Nathan worked on the finishing details of the build while Marjorie busied herself with decorating and creating a flower garden.

Not one to sit idle, Marjorie became very active in their new community and volunteered thousands of hours for several Island organizations. She was part of the Lady Minto Hospital Auxilliary and helped out in the Thrift store. She joined the SSI Women’s Institute and, among other activities, was one of the well known and respected Pie Ladies, making hundreds of fresh pies for the Salt Spring Fall Fair every year. She served tea and cookies to the (usually much younger) residents at Braehaven every week.

She and Nathan stayed active together enjoying travelling and continued to square dance at the Fritz Hall as members of the local Salty Wheels Dancers. As a Legion member she also enjoyed the regular Friday night dinners at Meadon Hall and would flit from table to table chatting with her many friends and colleagues.

Marjorie also enjoyed collecting tea spoons and tea cups from around the world on their many adventures and, in quieter moments, enjoyed cross stitch and petty point.

She loved animals and regularly donated to several animal rescue and protection groups. Her Border Collie, Skippy, was a constant source of joy and a great companion to her. She also became rather fond of Charles & Lynda’s cats as well as their Newfoundland dog, Sumo.

With the rare exception of the coldest of winter days, Marjorie would always dress in a skirt and blouse and heels whether she was out for dinner or puttering in her garden.

Marjorie was predeceased by her son Malcolm in 1975 and Nathan in 2002.

She eventually started slowing down and hung up her square dancing crinolines when she was 94 but continued assisting with lighter tasks for the Thrift store and Women’s Institute for several more years. Dinners at the legion continued as a Friday night staple and Wheel of Fortune and Jeopardy were evening favourites as well as any animal documentary she could find.

Charles and Lynda moved in with her in 2011 to assist with maintaining the house and caring for Marjorie as her health gradually deteriorated.

In 2019 she returned to Ontario and lived her remaining years with Willard and Rose in Severn Bridge.

There will be a family celebration of life in Ontario later this year.