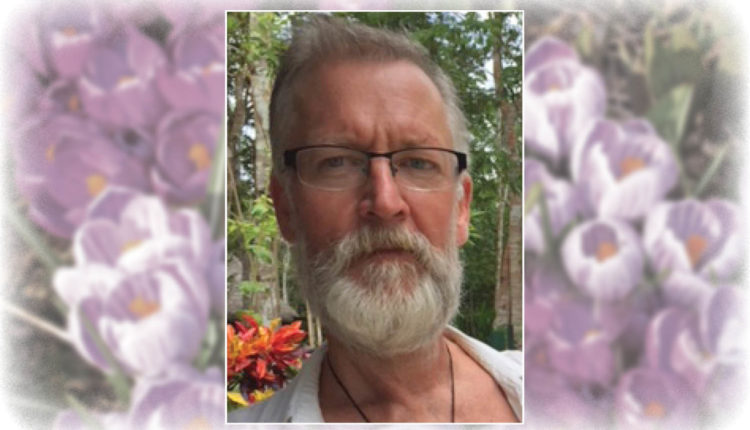 It is with deep sorrow that we announce the passing of a beloved husband, son, brother, uncle and friend Morley Myers on Saturday June 16, 2018. The final steps of his journey were made in his garden on Saltspring Island, in the arms of his beloved wife Isabelle, surrounded by a few close friends and, in spirit, the love of his family and of all those who knew him. Morley’s transformative journey brought him from struggle and pain to a sense of deep love and peace. Towards the end of his days, he said that he had hoped for a miracle but that on reflection, realized that the miracle had already happened. The miracle of healing for him was a profound sense of unconditional love, a love so profound, that it gave him the courage and grace he needed to leave this world and to journey into eternity in peace and dignity.

Morley Grant Myers was born on August 2, 1956 in Saskatoon, SK to parents Sgt Clarence (Skip) and Memory (Jackson) Myers. His parents eventually settled with their family, Morley, his brother Larry and sister Lynn, near Medicine Hat, AB where he spent his teenage and young adult years. In 1988 Morley and his dog Akela packed up and left ‘the Hat’. He came to Saltspring, fell in love with the island and never left. The creative environment he found here encouraged his evolution into the accomplished sculptor he became. He was also a highly skilled carpenter who helped to build many beautiful island homes. An engaging and dynamic dancer, Morley was greatly involved in the island’s social dance community. His friends will remember him best, however, for his endearing and boyish sense of humour, his love of pranks, his generosity and right to the end, his infectious laugh.

“The cure for me was His beauty,
the remedy for me was to love”. ~ Rabia