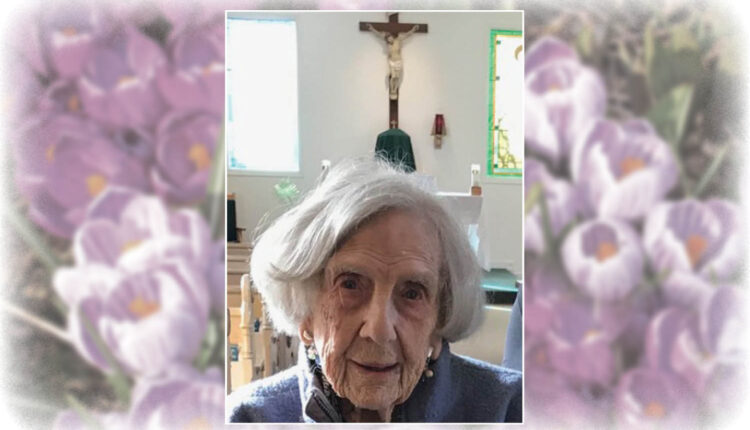 Matthew 25:23 “Well done, good and faithful servant, because thou hast been faithful over a few things, I will place thee over many things. Enter thou into the joy of thy lord.

On August 12th , 2020, at the age of 95, Ruth left her home on Salt Spring Island to be with her family in Heaven. Ruth leaves a legacy of a life of faithfulness and incredible love. She also leaves as her legacy her 6 living children, 10 grandchildren and 6 great-grandchildren, as well as relatives in Ireland and Australia. Ruth was predeceased by her infant son Paul and her husband William Liston. Left to mourn are children Anne O’Brien (Joseph), Ruth-Mary McMillan (Bain), Selma Lakhani (Zahir), Gerard Liston, Jacinta Broemeling (Roy) and John Liston (Alison) along with their families. Her dear friend and angel Lois was by her side to the end.

Born in Dublin, Ireland in 1925, Ruth lost her father Cyril Byrne in 1935 and lived a quiet, humble life with her mother Genevieve and sister Gen. Ruth developed a profound faith and attended daily mass before going to work at the Hibernian Bank in Dublin. She met and married Dr. William Liston in 1950 and moved with him to Manchester to continue his studies. They moved to Tripoli, North Africa serving in the British Army in 1954, returning to Manchester in the spring of 1956. With three girls in tow, they ventured to this new land called Canada in late 1956 arriving by boat and then train into Edmonton on Dec 15, 1956. They settled in Edmonton and had three more children to round out the family of six kids.

Ruth always lived by the belief of “Preach the Gospel every day and only use words when necessary.” She served the community in countless ways, a few of which were; Ruth and Bill initiated “The Miles for Millions Walk” in Edmonton in 1966 that served the third world through Oxfam. Ruth was one of the founders in “Birthright – a home for unwed mothers”. Bill and Ruth served on the building committee for Annunciation Church. Ruth was about making a difference and in her later years on Salt Spring she taught Catechism, ran the Alpha Course multiple times and took communion to the ‘old people’, many of which were younger than her! Ruth ministered to all she met.

The Family would like to thank the incredible care team at Heritage Place, led by Sandi Muller. Also Doctors Magda Leon and Dr. Christopher Applewhaite for their  care.

Ruth supported many charities and we encourage you to make a contribution to your charity of choice as the need during COVID has never been greater.

A mass of Christian Burial was held on August 18th 2020 with Ruth’s Family.

Editorial: Protect our right to know