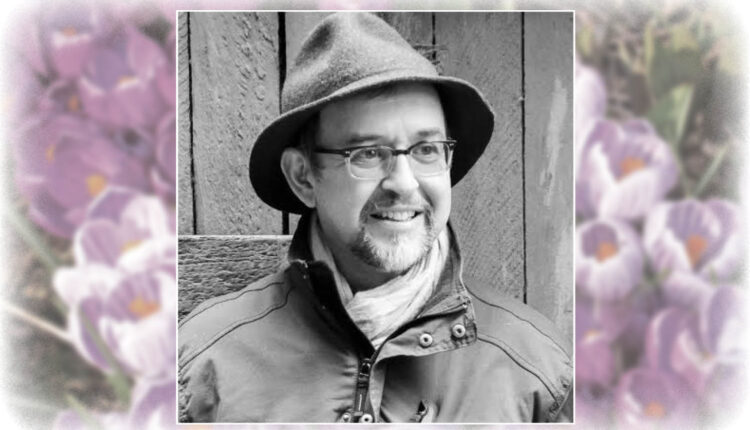 Geoffrey passed away peacefully surrounded by his family on Salt Spring Island as he had wished.

Geoffrey was born in Montreal to Aldyth and David (d. 2006) Levy, attended Elementary School in Ottawa, High School in Belgium and Queen’s University in Kingston where he graduated with a BFA in 1988.

Following university, he apprenticed as a traditional lithographic printmaker at The Printshop in Amsterdam, Netherlands, where he worked alongside many of the COBRA (Copenhagen, Oslo, Brussels, Rotterdam, Amsterdam) artists’ group honing his printmaking skills and broadening his creative vocabulary.

After completing his apprenticeship, he moved to Dublin, Ireland, and headed up the Open Studio printmaking department. He flourished as an artist and teacher there for many years before his health took a turn for the worse as a result of a chronic kidney disease, Alports Syndrome, which forced him to move back to Belgium at first and eventually to Salt Spring Island where his family had relocated after leaving Belgium.

He opened his own lithographic printmaking studio, Aerolith Press, soon after arriving on Salt Spring, where he printed not only his own work but other artist’s work as well. He continued printing until his health worsened and he had to begin dialysis treatments due to his kidneys failing.

Despite his ongoing health challenges, Geoffrey was able to learn and eventually teach Taoist Tai Chi which was one of his life’s great passions.

He had an incredible zest for life, a curious, engaging mind, a love for cooking and great food, art, music, film, friends and family. We will miss him greatly in the days and  years to come but are relieved that he is now far beyond the suffering that he endured for many years.

He said his final farewells on his own terms and went gently towards his death with open eyes and an open heart.

He is survived by his mother, Aldyth and siblings Carolyn, Barbara and Michael who all wish to thank Dr. Ron Reznick and Dr. Gayleen Hargrove for their tireless efforts over many years to keep Geoff in as good health as possible. We all wish to thank the staff of Lady Minto, Royal Jubilee, St. Paul’s and Vancouver General Hospitals for their extraordinary care, as well as Marion Village Assisted Living in Victoria for providing a home, excellent care and a loving environment for Geoffrey’s final years.