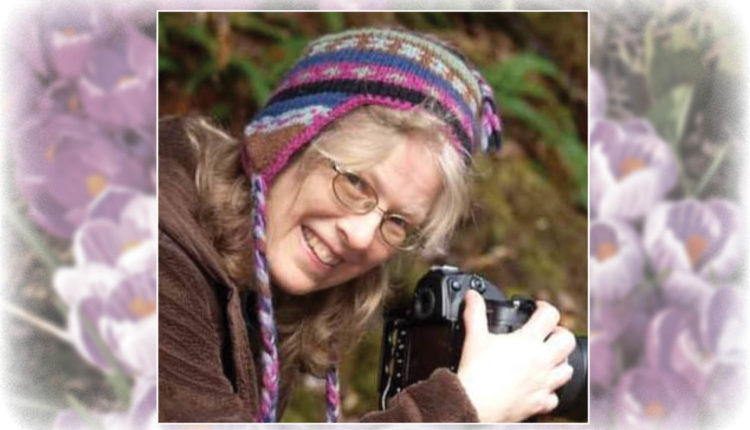 Kim the photographer at the Great Bear Rainforest

A Tribute to Kim Kornbacher

Let the beauty of what you love, be what you do.
– Rumi

Kim was my friend, and perhaps her only reclusive friend. She had so many colourful girlfriends that she told me about in a most loving way when we walked in the forest together. I did not meet even one of them. Neither did I meet her sister or mother, though I recognized their places as princess and queen in her life. Kim was a true lover of women as a species, including me.

She was altruistic in all ways, and in the forests, waterways and mountains even more so. The animals she showered with all her attention. Her dog Riley as the luckiest dog around.

She and I would often hike up on Channel Ridge after the clear cut, which we nick-named “the moon”.  There she would look down along the path and show me the teeny tiny little bits of past life still there.  She was an Archaeologist, teaching whenever she had the chance, although so softly you never recognized anything but her soothing voice of intelligence. Riley & Rain our respective dogs would always be along to keep us safe.

Most likely people on Salt Spring will remember Kim as a fighter of truth in governance. She fought at Islands Trust meetings as a member of the Archeological Advisory Committee even though she might not quite belong as an American. Very shortly after that, she became a Canadian Citizen and I have never seen her proud before this.

She always longed to live in the south end of the Island where she believed her experience of living would improve away from the ferry traffic of Vesuvius and the ever present view of industrialized Crofton.

Kim did not get to the south end but instead, went west to Hawaii.  There she and Kris built a cabin together in the pure joy of their natural surroundings. Kim always cared most about the simpler things in life happening around her.

She was a special photographer. Her favourite subject was wildlife in the Great Bear Rainforest. With her camera around her neck up until the end, out in the morning on the rocky coastal beaches, putting small things in her pockets still. These were her last words I heard her speak on a video Kris made — “my little treasures”. At the end of the day her Kris would line them up on the deck railing waiting for one more day to come.

Kim was an innocent as best there can ever be. There is no doubt she was in her childhood on this earth, laughing and smiling and appreciating every new twist and turn. On the big Island of life, God and nature had the ultimate say. The volcano in Hawaii swept her home away, and ovarian cancer took her from this earth. She is still with me.
– Jacki Hayes (Yeo), Salt Spring Island