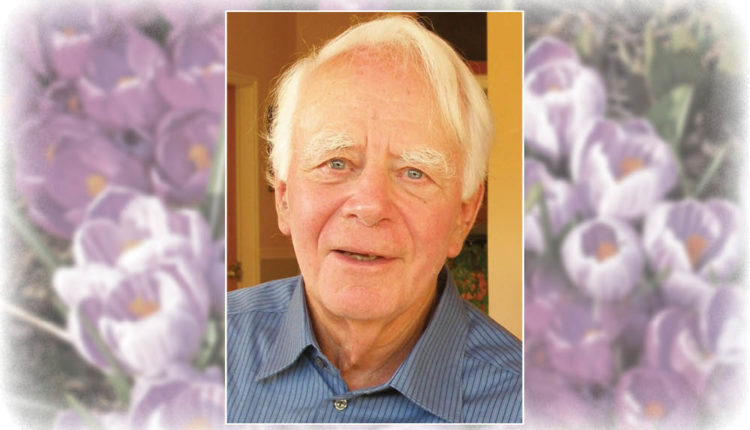 Douglas passed on peacefully in his sleep on the 17th of January.

He is survived by his loving wife of 58 years, Joyce (Anderson), daughters Fiona (Ted) and Valerie (Peter), son Colin (LeeAnne), grandchildren Callum, Charlotte and Elizabeth, and extended family from Scotland and Cornwall.

Douglas was born in London, England, to a Cornish father and a London-born mother. He excelled academically, obtaining his Ph.D. at Cambridge University in Physical Chemistry. His studies were interrupted while doing National Service for the War Effort. From 1952 to 1954 he worked at the National Research Council in Ottawa.

While a lecturer at St. Andrew’s University, he met the love of his life, Joyce while Scottish Country Dancing. Together they embarked on a journey to Vancouver where he had been appointed professor at UBC from 1959 until his retirement in 1990. While raising a family they had many adventurous holidays in alpine areas and rugged seashores. He also took his family to Scotland and England to explore the countryside, learn about their heritage, and visit family.

Upon moving to his Salt Spring Island paradise, he enjoyed landscaping, tending his extensive garden, exploring trails and creating new ones accompanied by his Corgis. Joyce and he enjoyed many vigorous walking holidays in the UK, Italy, Switzerland, Austria and Greece. His aesthetic sense was evident in his beautiful gardens, his cultivation of roses, his love of J.S. Bach, Debussy, and Elgar, his appreciation of English and German poetry, and art. Widely read, his passions were English literature, science fiction, detective stories, philosophy, and religious studies. He was a keen Scrabble player, securing most of the triple word scores. A deeply devout Anglican, he served in many capacities at St. Helen’s in Vancouver, later as a reader and lay preacher at St. Mary’s in Fulford, and most recently at All Saints in Ganges. A quick-witted and caring person, he shared his many passions with his family, and later his grandchildren, all of whom he loved dearly.

We would like to extend our great appreciation to the exceptional care given by Dr. Ian Gummeson and the staff of Lady Minto.

A private burial this week will be followed by a celebration of life at a future date.

In lieu of flowers, please donate in his name to Lady Minto Foundation, www.ladymintofoundation.com/.