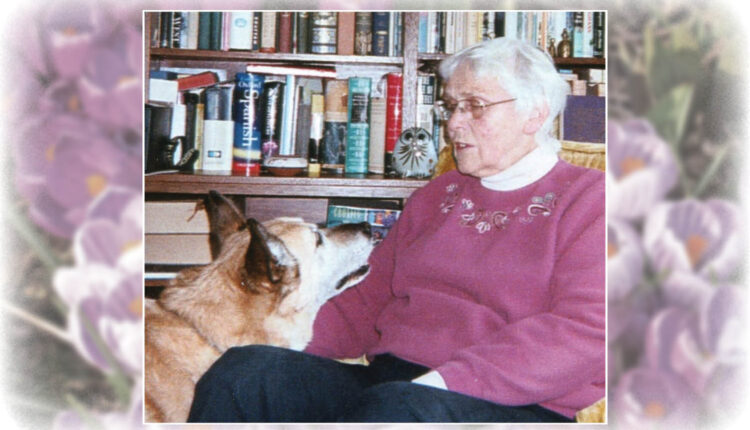 Cara Joy Hughes died 20th October 2021, the way she had lived, independent and clear-eyed to the last, at home with her beloved dog Pedro, and with friends at her side. We will miss her, for we cherished her as a wonderful friend and neighbour. Over the last thirty years, in the course of determined daily walks with one of a succession of equally determined dogs, she always took time to exchange a few words with us. Had we only known more about her life and achievements, what conversations we might have had!

Cara Joy was born in Toronto in 1932. Her parents, Gordon R.  and Eva C. Hughes, soon moved the family which included two older brothers Gordon and Bill to Winnipeg. Cara Joy’s intelligence and unremitting curiosity about the world launched her studies, first at the University of Manitoba, where she received a B.Sc. (Hons) in 1954, and then at Harvard for a M.Sc in 1956 and a Ph.D. in 1968.  This, in the then-prevailing “men’s world” of mathematics and physics, was no minor achievement. Interspersed between graduate degrees was pioneering work in radio astronomy and computer programming. Settling briefly to teach computer science at the University of West Indies, she then took a position in the same field at the University of British Columbia. Always open to new pursuits, Cara Joy subsequently began law studies, and was called to the bar as a barrister and solicitor in 1981. She practiced mostly in family law.

Cara Joy retired to Salt Spring Island in 1991, but remained as active, resourceful, and indefatigable as ever, helping to deflect a developer from building an airfield in the Fulford Valley, supporting anti-logging camps and blockades at Burgoyne Bay, organizing a Shakespeare reading group for an offshoot of the University Women’s Club, driving for seniors, and gaining a name for herself as the ‘Scrabble lady’ for Greenwoods. Her energy and drive, her kindness, acute perception and humour have delighted a wide network of friends for many years.

A Celebration of Life will be held and details will be announced later. In lieu of flowers, please donate to Eco Justice, David Suzuki foundation, Nature Trust, or the British Columbia World Wildlife Fund. The funeral home is www.dignitymemorial.com/funeral-homes/victoria-bc/first-memorial-funeral-services/3811and the cremation will be private.