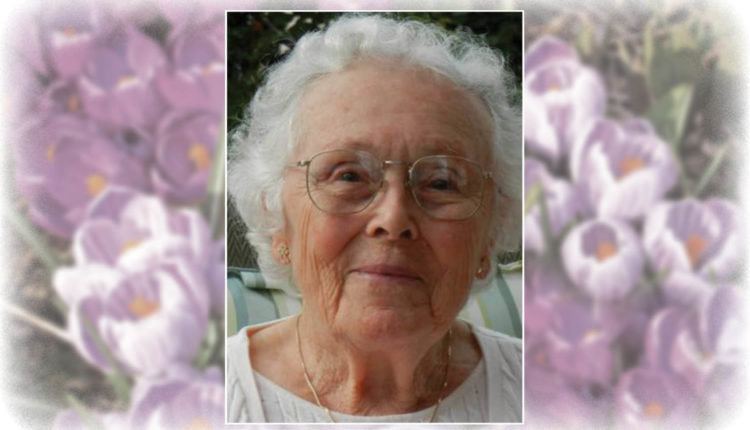 Ernestine passed away peacefully at the age of 95 with family at her side, at Kelowna Hospice House where her husband of 61 years died ten years earlier.

She was the elder of two daughters born in Cabri, Saskatchewan to farming parents Doris and Wilfred whom she adored. In 1937, after trying to outlast the Great Depression, the family abandoned the farm and moved to Calgary. There she graduated from Crescent Heights Collegiate Institute and then from RN training at Calgary General Hospital. During her training she met a young airman, Arthur, from New Zealand, who was participating in the WW2 Commonwealth Air Training Plan. They married in 1948 and over the course of their life together lived in Winnipeg, Vancouver, Burnaby where their children were born, Auckland NZ for 3 years in the mid ‘60s, Richmond, Tsawwassen, after retirement 28 years on Salt Spring Island, and finally Kelowna. They raised five children, built three houses, landscaped properties, created English-style gardens, travelled, hiked, camped, cruised, and did some sailing. They even met the Queen. Ernestine was grateful to have seen “a bit of the world”.

But deep in her soul, with her love of farmlands, farm animals – especially roosters and horses, fields of golden wheat, and wide-open skies, she was a prairie girl throughout her life. It made her heart sing.

For most of her life she was very active in the United Church of Canada. She was a Sunday school teacher, church elder, choir member and leader. She was a Girl Guide Leader, Brownie Brown Owl, active in the Air Cadets Women’s Auxiliary, in seniors’ choirs and bell ringers, and a Saskatchewan Roughriders and Toronto Blue Jays fan. She knitted, crocheted, did fine needlework, and sewed dance costumes for her girls. She excelled at baking and at preserving fresh vegetables and fruit, as well as making pickles and jams – skills she learned to appreciate growing up on the farm, when one had to make use of what one had and not waste a single thing. Her farm years formed her and informed her throughout her life. One of her favourite sayings was, “It’s as crooked as a cow’s hind leg”. Her prairie grit sustained her, especially through several difficult health challenges, which she approached with pragmatism, determination, and grace. Ernestine was very thankful for her full life. She tried her best, loved, and was loved.

Thanks to her friends and staff at Sunrise Village and Mountainview Village, who made her last ten years more enjoyable. Thanks also to Dr. Clarke at the BC Cancer Agency and the nurses, doctors and staff at Kelowna General Hospital. A very special thanks to the staff and doctors at Kelowna Hospice House who cared for her so tenderly and compassionately in her final days.