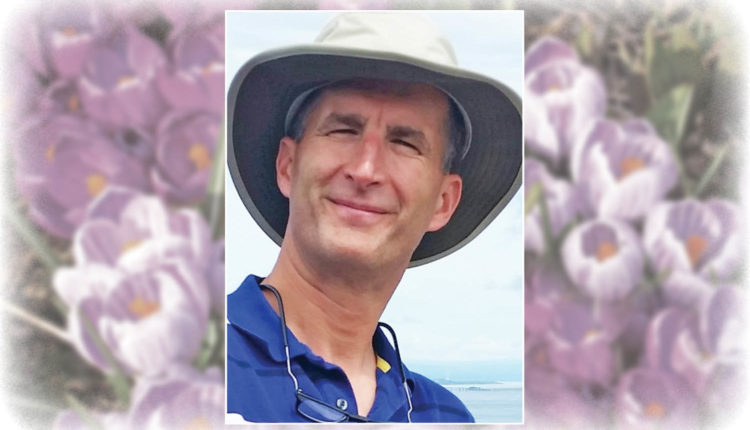 It is with great sadness that we announce the passing of David Geoffrey Hanks on August 24, 2019 at the Royal Inland Hospital in Kamloops, BC. He will be lovingly remembered by his beloved wife Hilary, his children Megan, Geoffrey, Matthew and Graeme, his mother Merilyn, his brother Greg (Tracey), his cousin Debbie Okrainetz (Richard), his parents-in-law Samuel and Nancy Yoshida, sister-in-law Naomi Yoshida, brothers-in-law Sean Yoshida (Asae) and Mark Yoshida (Susan) as well as many nieces, nephews, extended family and close friends. He was predeceased by his father, Mitchell in 2004.

David was born in Nelson, BC. His father was in the RCMP so David grew up in several smaller communities including Nelson, Vernon, Ocean Falls, Terrace, Kelowna and Salt Spring Island where his parents eventually retired. His love of learning led him to study at the University of Victoria where he completed a BSc (Honours) in Chemistry and graduated at the top of his class. He then attended medical school at the University of British Columbia, where he met the love of his life, Hilary. They married in 1993, and moved to Ottawa where he completed his general surgery residency. David and Hilary were happy to move back to BC in 1998 when a position became available at the Royal Inland Hospital in Kamloops.

David was passionate about his work. For 20 years, he practised general surgery with what he referred to as “the most amazing and truly supportive group of colleagues” which he believed he would not have found anywhere else. As a clinical instructor for the UBC Faculty of Medicine, sharing his knowledge by teaching residents and medical students was often the highlight of his day. Always a strong vocal advocate for the Royal Inland Hospital and its services, he dedicated many tireless hours on various committees to making it a better place for the people of Kamloops. The kindness and support from the families and community of people in Kamloops meant so much to David and his family, especially during this past year and a half as he battled cancer.

David lived life to the fullest. Most important to him was spending time with his family. He was always present at his children’s activities including music recitals, soccer games and judo. He looked forward to our family reunions every summer at Chesterman Beach, and every winter skiing at Sun Peaks. With many fond memories of fishing as a child, he remained an avid fisherman spending endless hours with his family on the waters off Tofino, on Adams and Horsefly lake, and around the Gulf Islands. He loved reading and learning, and enjoyed talking with close friends on long walks. A very creative person, David was a very enthusiastic and talented woodworker.

A Celebration of Life will be held on Sunday, September 22, 2019 at 4 pm at the Southwest Community Church, 700 Hugh Allen Drive, Kamloops, BC where David listened to many of his children’s piano recitals. In lieu of flowers, please send donations to the Royal Inland Hospital Foundation in memory of David.