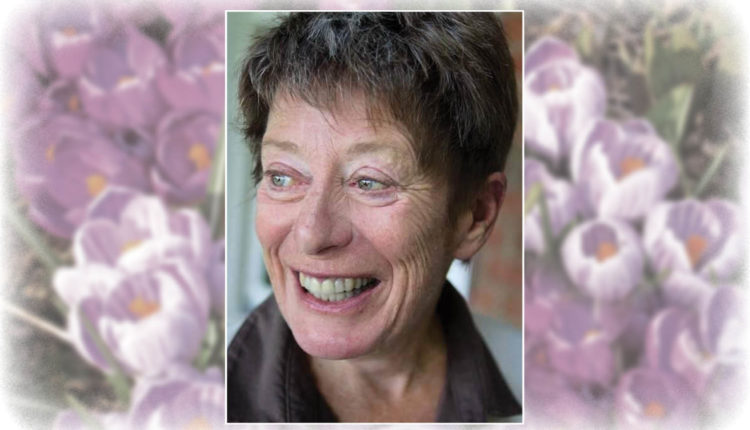 Virginia died peacefully in her home on Salt Spring Island on February 20, after a full and adventurous life. Born in Windsor, Ontario to parents Virginia and Gordon Grant, Virginia attended Oak Bay Beach High, where she made many lifelong friends.

Virginia went on to study French literature at UBC, where she met the love of her life Jack, whom she married in 1964 after a whirlwind four-week courtship. Virginia and Jack had a long, happy marriage in houses full of friends, laughter, pets and love on Laurier Ave, Point Grey Rd. and finally Salt Spring Island, which had also been a special place from her childhood.

Virginia began her career as a social worker, later worked for the BC Parole board, but discovered her true calling when she co-founded Avalon Women’s Recovery Society. Since 1989 Avalon has provided treatment, support and care to thousands of women, and for her work Virginia was awarded the Order of British Columbia in 2000. Virginia had a great talent for bringing people together, and ‘drawing them out’ in listening and thoughtful rapport, and wherever she went she was the centre of activity.

She was a renown storyteller and host, a lively and literate wit, and was described aptly by friends as a true force of nature. Virginia had many strong passions, including tennis, opera, reading, animals, puzzles and the Canucks (though the last more love-hate.) She enjoyed scanning the obituaries, in later years looking for herself. Her passions brought her around the world as she was an avid traveler, and she often said she regarded the Metropolitan Opera as her spiritual home. From backpacking around Europe in college to cruising the Yangtze, there was scarcely a corner of the globe she hadn’t visited – with a great relish for people and history, and a linguist’s curiosity.

Virginia is survived by her sons Graham (Cristina), David (Tanya) and Peter, and her grandchildren Lucas, Spencer, Oscar, Julián, Malcolm and Sara. She is also survived by her brothers John and Peter (Paula), and their children, Amanda, Andrew and Molly.

We all will miss her terribly, but take comfort knowing that her greatest passion was her love for her family, a love we continue to carry. Celebrations of Virginia’s life will be held in her Salt Spring home on March 19th at 1pm, and then at Avalon Vancouver Centre on March 20th at 4pm. In lieu of flowers please consider a donation to Avalon Recovery Society.

Old Boys 3Ms Unable to Stick It to GH Gunners