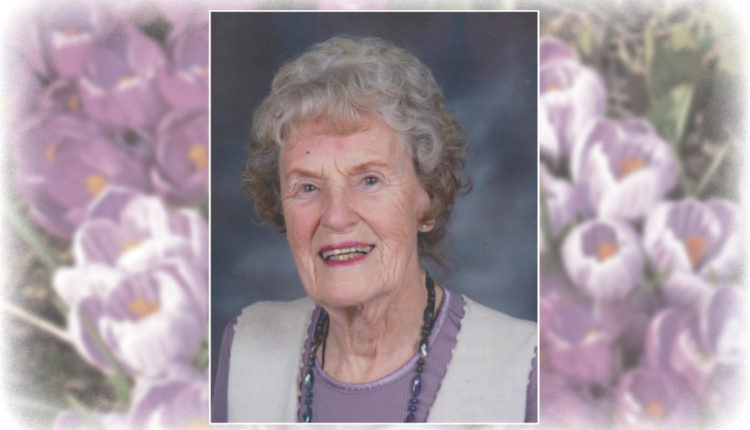 It is with great sadness to announce the passing of Kathleen M. Garside at the age of 99. Kathleen passed away peacefully at Lady Minto Extended Care just shy of her 100th birthday.

Kathleen was born in Wimbledon, Surrey, England on February 28, 1920.  She worked in London throughout the war years & met her future husband Fred Garside at a local dance. Kathleen immigrated to Canada as a warbride in 1945. Her Canadian life began on a small farm near Colfax, Saskatchewan. The family later moved to Weyburn & then on to Regina in 1949. She worked as a stenographer for most of her working life.

Kay was one of the founding members & secretary of the Saskatchewan War Brides Assoc. which played an important part of her life and took her to many War Bride reunions across Canada. In her retirement years, Kay volunteered for 30 years at the Pasqua Hospital (Grey Nuns), Disabled Veterans Hospital, and Regina Village Seniors Home in Regina. Kay moved to the west coast in 2013 to be closer to family which proved to be a wonderful decision.

Kathleen was predeceased by her husband Fred Garside in 1989 & daughter Sheila Ruehlen in 2011.
Heartfelt thanks go to the special staff at Lady Minto Hospital in extended care, acute care, physiotherapists & to Dr. Ron Reznick.

A funeral service & tea will be held for Kathleen at St. Cecelia Catholic Church in Regina on May 7, 2020. In lieu of flowers, please direct donations to The BC Cancer Foundation.