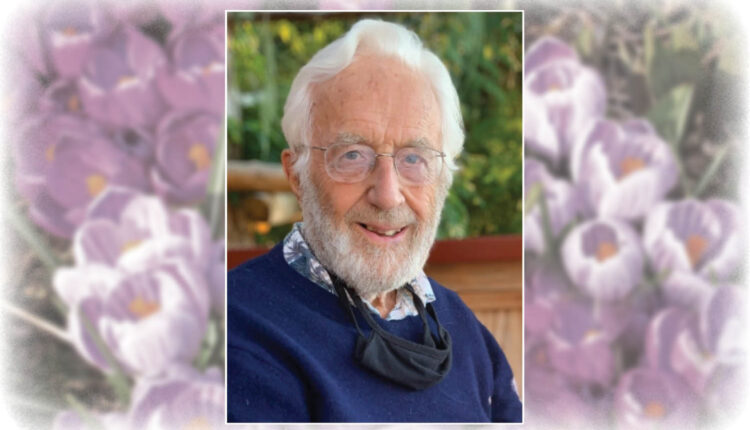 Born in London, England, Basil lost his mother at an early age and was raised by his aunts while attending school in Oxfordshire. He lived through the WW2 London blitz, and served in the British Army, including 2 post-war years as a Royal Engineer organizing the return of troops.

In 1949 he set sail for North America, spending four months touring and deciding where to immigrate. He chose Vancouver, and met his wife-to-be, Helen Margaret Simpson, on the transatlantic sailing back to Britain. Margaret’s mother Lena told Basil that he could marry her daughter if he had a viable profession in Canada and asked what he was expert at. The answer was organizing, railways and math, so Lena suggested he enrol in the accounting program at McGill University. Five years later, after travelling back-and-forth between Montreal and Vancouver, he graduated with the highest Chartered Accountant marks in Quebec.

1957 brought eight months of work with the BC RCMP investigating corruption in the Sommers scandal, travel throughout Europe, and the birth of his first son, Alan. In 1958 he was hired as ‘VP, Administration’ by Grosvenor Laing, a UK-based company that built Annacis Island, SFU, and numerous buildings, bridges and shopping malls in Greater Vancouver and Victoria. Basil and Margaret moved to the Deer Lake area of Burnaby, and 1959 brought the birth of his second son, Ian. In 1973 Basil became ‘VP, Administration’ of Daon Development, one of the most successful development companies in BC history. Also that year, Basil and Margaret welcomed a foster daughter into their home, Caroline Grieve.

Basil retired in 1980, and with Margaret, purchased a beautiful property at Isabella Point on Saltspring Island, moving back-and-forth between there and Solana Beach in Southern California for 8 years until deciding Saltspring would be their permanent home. Soon after Margaret’s death in 2011, Basil worked with the Saltspring Conservancy in placing an ecological covenant on his most treasured section of land right at Isabella Point.

Basil had a keen mind and many interests, including model railways, building, classical music, and travelling. He was fortunate to be able to live a very active life, and that determination continued right through to the end. His last hurrah was driving his beloved Ivy to Medicine Hat just a few months ago. Basil will be very fondly remembered by those who survive him: Alan and Ian and other family members, including grandsons James and Evan; Patricia Colley, his half sister, and her family; and Ivy Anderson, his romantic partner late in life.

Basil was diagnosed with oesophageal cancer last summer, and had prepared for MAID, but was able to die relatively peacefully at home. Special thanks to all the kind caregivers, doctors, nurses, friends, and neighbours who helped us through this challenging journey. A memorial service is being planned for Vancouver this summer.

Building a ‘culture of care’ on Salt Spring