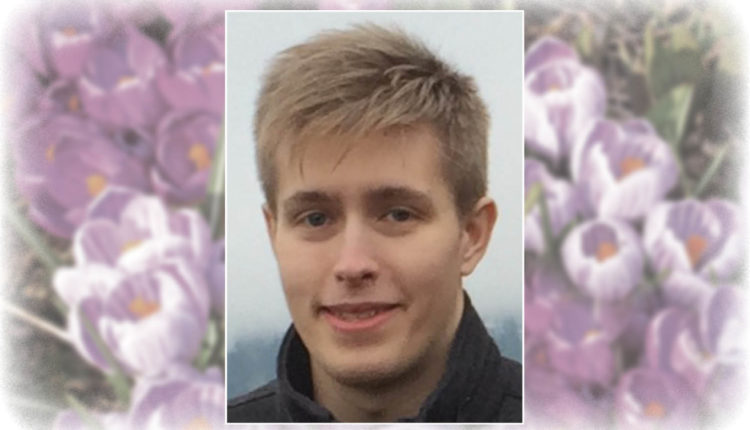 Last Friday we lost our loving and devoted eldest son. We lost our brilliantly clever and hilarious brother; our outrageous cousin; our kind, silly and fiercely loyal best friend; our diligent employee; our intelligent and imaginative Dean’s list student. We all, each of us, lost so much.

Connor was big – he was a big person with a big heart and a big mind and a brilliantly big and magnetic personality. When he loved, he loved fiercely and with all his heart. And he loved a lot. He loved his first dinosaur, Rex. He loved the stuffy that he won from the “best claw machine ever” at the Kings Lane bowling alley, aptly named, Ally. Another well-loved stuffy, Whaley, still resides at his bedside. He loved all animals, with a special fondness for sea life especially whales and jellyfish. He loved his pets, especially Abby, Buddy, Kai, Casey and Delilah. He loved good comedy and a good debate. He loved justice, philosophy, and fairness for all. He, like all members of the family, was an active member of the grammar and punctuation police. He would have added semicolons appropriately for me here.

He loved his brothers Brendan and Christopher an unfathomable amount. He was never happier than when in a dogpile of brothers and cardboard swords. Or strategizing for hours on the trampoline playing that game that had the constantly changing rules.

He loved his best friend, Rebecca, loyally and consistently. She was his rock, and his constant companion for two and a half years at VIU.

Connor possessed intense focus. As noted above, he was on the Dean’s list in Criminology for four years running, and was just two courses short of completing his degree. He had planned to pursue a career in law.

He loved music. He had impeccable taste in everything: people, clothes and music. Some of his favourite bands were Muse, Florence and the Machine, the Black Keys, The Killers and Lana Del Rey. He also loved anything from Rock Band, most songs on which he had earned perfect scores on the guitar and drums. He was an avid fan of Game of Thrones.

He challenged himself constantly. He was an amazingly competitive gamer and could beat anyone crazy enough to take him on in Halo, Wow, Rock Band, Mario Kart, Hearthstone and Super Smash Brothers. His written school papers were brilliant, intelligent and fresh.

Connor the baby. Connor the boy. Connor the man. At each stage so gloriously unique; so absolutely sure of what he loved and so careful to protect it. You always knew that if Connor was on your side, you wouldn’t lose. If it was Connor’s goal to cheer you up, you’d be laughing so hard that your sides would be splitting and you’d be begging him to stop.

He was brave and powerful. He battled courageously to protect the underdog. There was nothing he couldn’t do if he put his mind to it. Or so it seemed. Had we known the depth of his despair; had we seen through his brave face; we would have made him know how loved he was. How special. How very necessary.

For those who knew Connor, there will be a service to commemorate his life at two o’clock on Thursday, October 5, 2017 at All Saints by the Sea. Space is limited, so we would appreciate if only those who knew Connor attend. In lieu of flowers, please donate in Connor’s memory to the Canadian Association for Suicide Prevention https://www.canadahelps.org/en/charities/canadian-association-for-suicide-prevention/#donate_now.

In the meanwhile, please post your favourite memories of Connor on the Facebook page: Loving Connor Elwell.