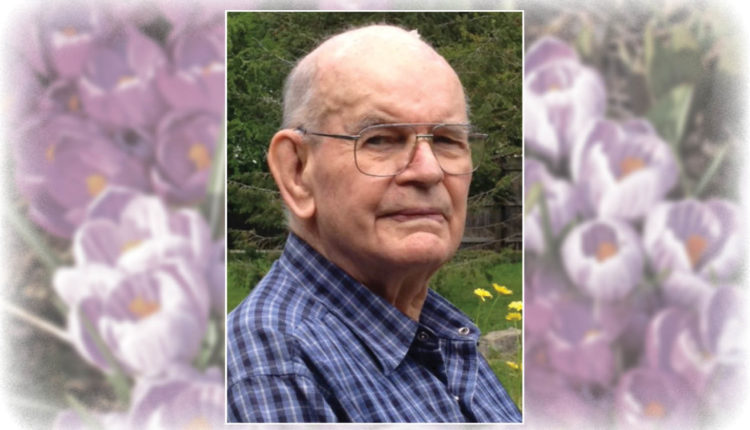 “Jim” was born in Highland Park, near Detroit, Michigan USA, and after a 93 year long active life, died in Lady Minto Hospital, Salt Spring Island, BC. When he was very young, his father left his airplane manufacturing plant in Detroit, moved his family to Atlin, BC to start a gold mining operation. After growing up between Atlin and Detroit, Jim moved to Vancouver to attend “Shurpass” School long enough to get a language credit to qualify for admission to UBC. This led him to his future wife to be, Joy Deacon. His goal at UBC was electrical engineering. On registration day, the long line for electrical engineering led him to a friend who was standing in a very short line of only five students for mining engineering. After just one year at UBC, the call came from “Uncle Sam” (the US army). Basic training completed, the war ended, so back to UBC to finish mining engineering. To alleviate the stress of his finals in the last year, he took flying lessons and got his pilot’s license.

Now a UBC graduate, he moved to Atlin for a very brief marriage to an Atlin girl. Six months later, without a wife, he moved to his new job with the Canadian Exploration Company in Salmo, BC. Joy agreed to take Jim back and married in 1952. Three years later, with baby in tow, Joy pregnant with second baby, they were transferred to Pato, Columbia; Jim was to be the chief engineer at a placer gold mining site. Five eventful years later, suddenly for safety reasons, the family was sent back to Vancouver to work in the head office of Placer Development. Jim worked there until his retirement in 1985. He and Joy chose to build the house on Salt Spring where they lived until moving to Meadowbrook.

Jim was very active with Royal Vancouver Yacht Club, the Coast Guard Auxiliary, Power Squadron and Seniors. He had a passion for sports cars and airplanes, having owned both in his early years with Joy. Once in Vancouver the ocean called again, and a great love of boating and boats followed. Fifty-five plus years of cruising the West Coast of BC and Alaska left behind a very long trail of friends and stories.

In lieu of flowers, please consider donating to Lady Minto Hospital, where an amazing group of caring people looked after Jim for the last few weeks of his life.