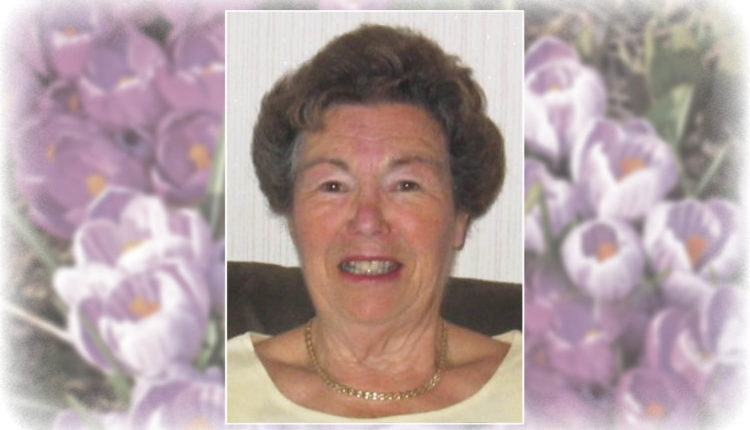 VIVIAN DAWSON (HESELTINE), a resident of Victoria, previously of Salt Spring Island British Columbia, Saskatoon Saskatchewan and England, passed away on October 15th, 2017 at the age of 87 years.

Vivian’s adventure of 87 years began on March 1st. 1930. She was born to Sydney and Marjorie Heseltine at their home on Oldfield Avenue, Bishopthorpe, York, England. In 1933, she welcomed her only sibling Jean to the family. Over the next several years they lived in South Cave and Hull before returning to York where Vivian attended Mill Mount Grammar School for girls until the age of 15 when she took her school leaving certificate and started work as a junior clerk in the architects department of County Hall in Beverly, Yorkshire, followed by employment as a librarian at the County Library. On February 28th. 1949, the day before her 19th birthday, Vivian was accepted at Leeds General Infirmary to begin her dream career of nursing. She always remembered the following training years fondly and made many life-long friendships. Vivian qualified as a State Registered Nurse in August 1952 and quickly found her niche in the Operating Theatre where she was promoted within two years to the position of Theatre Sister. It was while working there that she met her future husband Bryan Dawson who was in his final years of medical studies. A wonderful romance ensued and they were married on April 9th, 1955, one month after Bryan qualified as a Physician. Vivian retired from nursing with the arrival of their first child in 1956. After living for a short time in both Stockton-on-Tees and Burton-on-Trent the growing family moved with their now four children to Bryan’s boyhood home of Broughton-in-Furness in the Lake District of Northwest England. Vivian spent her six years there as a busy Doctor’s wife, known to the locals as “Mrs. Doctor”, immersing herself in village life and presiding over community events in addition to raising their five children. In 1968 Vivian and Bryan and family plus two dogs, fourteen trunks and an assortment of toys emigrated to Canada, sailing across the ocean on the last East-West crossing of the Empress of Canada and riding the train across the country from Montreal to Kamloops, British Columbia. Unfortunately, the medical position Bryan took on was not to their liking and less than six months later the family packed up yet again and returned to England to live in Ulverston, a town not far from Broughton. They remained there re-connecting with old friends, making new ones and enjoying everything the Lake District could offer, until 1974 when they once more emigrated to Canada, this time choosing Saskatoon, Saskatchewan. Both Vivian and Bryan enjoyed life on the prairies and lived there until retiring to Salt Spring Island, British Columbia in 1991. During their 17 years in Saskatoon, Vivian was an active member of the community. She was a member of the Foundation Board for Saskatoon City Hospital from 1984 to 1990 and for many years a busy member of the Hospital Women’s Auxiliary. She was involved with Folk Fest, especially organising the English/Welsh Pavilion and she sang in the choral group “The Georgians”, performing at many events and functions over the years. Her volunteer life followed her to Salt Spring Island where she became President and Past President and Auxiliary Representative to the Lady Minto Hospital Foundation and was a very involved Auxiliary member, volunteering weekly in the thrift shop and organising many successful fund-raising events. She and Bryan also became busy members of the Salt Spring Island Seniors for Seniors and spent many wonderful productive years as both President and Treasurer. Vivian particularly enjoyed singing with the popular seniors choir “The Lost Chords”. During all of these busy active years Vivian, together with Bryan spent many fun, memorable holidays with their large, expanding family, laughing at silly jokes and drinking lots of tea and wine. They travelled together back to England numerous times to visit family and friends. They discovered the hot, sunny weather of both Hawaii and Puerto Vallarta, Mexico, which became a favourite destination for Vivian and they also enjoyed a much-anticipated trip to New Zealand.

In November 2016 Vivian and Bryan left their home on Salt Spring Island to live in a retirement community in Victoria. As Vivian’s health declined after a long three month stay in the hospital, they were warmly welcomed to the Sunrise Assisted Living community where she was looked after by their caring staff, until she passed away with Bryan at her side, on October 15th, 2017. Her family will be forever grateful to everyone who entered her life in the final months. For the loving care and compassion given to her and for the recognition and complete understanding that Vivian was special to every friend who knew her and all her family who loved her so very much.

Your life was a blessing, Your memory a treasure, You are loved beyond words, And missed beyond measure.

Contributions in Vivian’s memory can be made to the Canadian Heart and Stroke Foundation.