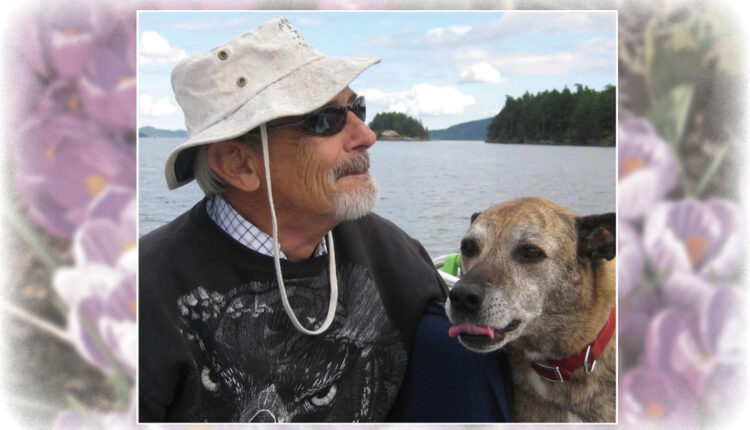 Long time Salt Spring Island resident Larry Cross died peacefully at Lady Minto hospital after dealing with cancer. Larry was born in Moose Jaw, Saskatchewan and moved to British Columbia in his late teens. Later in his twenties he worked as a radio news reporter at CJVI in Victoria, BC. He was an alderman, and an active member in Lions Club.

He loved to fly small aircraft in his younger years. He was well known for his radio announcer voice.

He moved with his family to Courtenay, BC where he operated a Radio Shack store. He then moved to Richmond, BC. A lifelong entrepreneur, Larry started several small businesses.

Within a year of his arrival on Salt Spring, he started a pest control company that is still owned and operated by his long time best friend Karen Cross whom started the business with him in 1990.

Larry enjoyed life in the outdoors and on his sprawling property he had many projects on the go. Larry was often on the water with his canine first mate, sailing, cruising, crabbing and exploring. He was a wonderful cook and enjoyed meals with good friends filled with wonderful conversation. In his retirement years he enjoyed traveling to such places as Australia, and many states including Florida to see his extended family.

Larry is survived by his three sons, Darryl, Gary, and Rob, and his dear friend Karen.

He was loved and respected in the community and known for his service to others. Larry was aware of and appreciated all the love and friendship in his life.

A public memorial, where we can share our stories and memories of Larry, will be held when gathering indoors becomes possible.