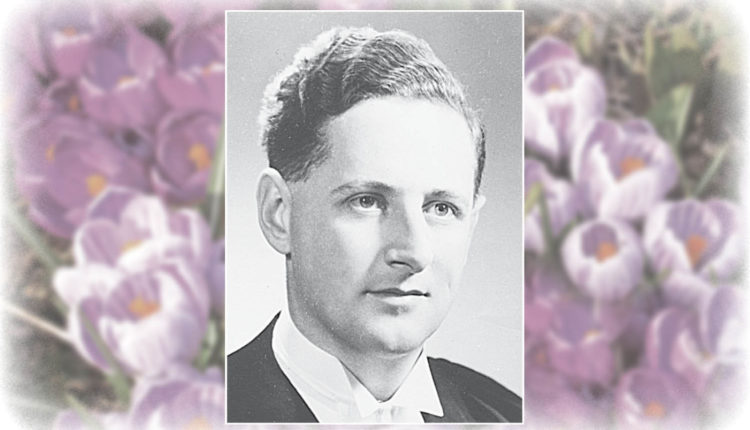 John, aged 94, passed away peacefully in his sleep Wednesday, July 11, 2018, on Salt Spring Island, BC, a week shy of his 95th birthday.  Son of James and Phyllis, John was born on Mayne Island July 17, 1923.
After growing up in Vancouver, John enlisted into the Canadian Navy at age 17, trained as an officer and went to war, fighting overseas during WW 2.  His war travels took him to many lands including England where he met and married his newfound love, Joyce Hilda Noall of Portsmouth, then a member of the Royal Navy WRENs.

Following the war, John introduced Joyce to Canada and settled in Victoria so John could continue his naval career.  Soon after, though, he was inflicted with tuberculosis and hospitalized for an extended period which ended his career.  Instead, he put hard work and effort into an education at the University of Victoria and embarked on a legal profession that initially took his young family to Prince George, BC, and where John first pursued raising Arabian horses, a hobby he continued for many years later.  After a year in Boston attending Harvard University for post-graduate studies, John moved his ever-growing family to Ottawa in 1963 and a year later to Pickering, Ont. where he settled in with the Toronto law firm Borden & Elliot with whom he eventually became a partner.

John semi-retired in 1986 when he and Joyce returned to Mayne Island to enjoy the relaxed island life that included bridge games, church activities and the Lion’s Club, an organization John loved and for many years presided as president of its local chapter, and during this time they enjoyed extensive travel.
Joyce predeceased John last year in her 95th year.  He is also predeceased by daughters Anne and Elizabeth and by brother Robert.  He is survived by his children Sandra, Chris, Jamie and Charlotte, numerous grandchildren and great grandchildren, and by sisters Rosemary and Joan.

The Coates family would like to extend our gratitude to the staff of the extended care facility at Lady Minto Hospital on Salt Spring Island for their attentiveness and loving care provided to John the past few years.
Full services will be held at 1 pm, Saturday, July 28, at the Chapel of Mary Magdalene on Mayne Island with interment for both John and Joyce.

In lieu of flowers, donations may be made in Joyce’s and/or John’s names to the Lady Minto Hospital or to the Mayne Island Lion’s Club.