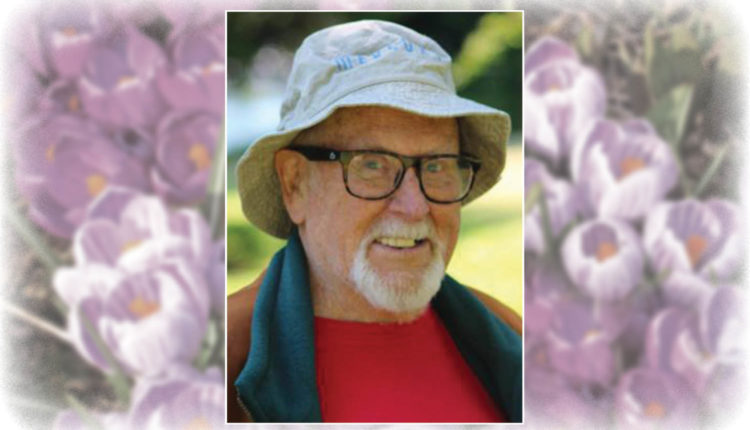 Tom was born 91 years ago, in London, England to a family that valued music, art, history, and eccentricities while maintaining their strong British values.

He was sent to Canada in 1940 to get him away from the relentless bombing of London in WW2, which had of course fascinated him and propelled him to the roof tops to watch.

He boarded with cousins in Cultus Lake and started high school in Chilliwack, where he met the love of his life, Joanne Ferguson.

He graduated as the valedictorian and attended UBC briefly before enlisting in the RAF. He was posted to India and had a LOT of stories about his years there, where he became fluent in Urdu.

Tom and Joanne were not to be separated by the war, or by continents, and they married in England in 1950, and set sail back to Canada.

In Canada Tom worked at a variety of jobs, including varnish maker, potato chip maker, burger flipper, and real estate agent, all while attending UBC, to become a teacher. He finished his BA degree and his Masters Degree over the years, part time. He mainly taught Grade 6 — at Marlborough, Seaforth, and Clinton Elementary Schools. He was a popular and inspirational teacher.

He retired after 30 years of teaching, at age 60. He and Joanne built their ocean front home on Salt Spring Island, with a stunning view that each of them loved and looked at until the day they died.
Tom and Joanne spent their retirement years on Salt Spring, enjoying the unique and charming Salt Spring culture, volunteering at the library, and participating in the Trail and Nature Club. They supported environmental causes and the arts. They were extreme conservationists, so that any visitors had to be immediately instructed on toilet flushing (not so much), garbage disposal (there was to be no garbage) and water use (as little as possible). Tom also practiced his hobby of food price comparisons and always watched for sales. As a result he had a huge reserve of canned and frozen foods.

Tom was a beloved husband, father, grandfather, friend, and teacher. He was a philanthropist: ever frugal when spending on himself, he donated generously to environmental, animal welfare, and health related causes. He was a world traveler, and life-long learner of other languages. He and Joanne took up skiing in their 40s and he reluctantly gave it up at age 86. He liked to ski fast and drive fast, and we are so grateful he went peacefully as a result of heart failure and not in a horrible multi-vehicle accident, as many had predicted.

He could fix anything, and given the basement full of everything they had ever owned, he had an inexhaustible supply of spare parts. Having made a recent survey of the basement, we’ve concluded he could have survived a zombie apocalypse in conjunction with a massive solar flare.
Tom loved gardening, cooking, and socializing. He was a friendly, kind, and compassionate man. He had infinite patience. He had original thoughts and ideas and could converse on topics from physics and astronomy to literature. He was a humble man and a world class mumbler. He loved to gently mock (behind their backs) officious and self- important twits. He literally couldn’t kill a fly. They had to be rescued.
Tom loved jazz, swing, r&b, and southern rock, particularly Lynyrd Skynyrd and the Allman Brothers. He was a terrific dancer and figure skater. He was smart, well educated, observant, irreverent, and flat out hilarious. We loved him so much.

Tom was predeceased by his parents, Herbert and Henrietta Cartwright, his sister Mary, and his beloved Joanne, 4 years ago. He is survived by his loving children and grandchildren: John (Judy); Jane (Alf Kempf) and Madeline (Cody) and Molly; Catherine (Des Doyle), and Thomas (Tammy), Patrick (Maddy), Jacqueline (Max), and Caroline; and Robert. He is also survived by his cousin Barbara and life-long friends Caroline and Ralph.

A reception will be held at Tom’s house at 235 Monteith Road, Salt Spring Island, on December 9th, from 2 pm onwards; and in Burnaby, on December 16th at 2 pm at John and Judy’s house at 4366 Portland Street, Burnaby.

In lieu of flowers, donations can be made to a number of animal welfare and Salt Spring conservation charities listed on the Haywards Funeral Memorial page.