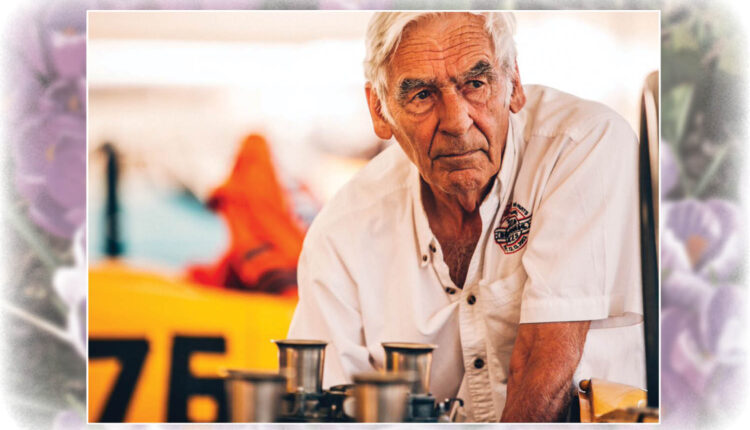 Anthony (Tony) Campbell passed away at his home on Salt Spring Island on June 9, 2022. Tony was born on June 13, 1941, in Surrey, England, an only child to Marjorie Ethel and Edward Augustus Campbell. Both his parents were serving in the British military forces. He lost his father at a very young age. In 1946 he immigrated to Vancouver Island, Canada with his mother, now a war bride married to Bert Beggs. Tony attended school in the Chemainus area. He left school, barely a teenager, and began his working career. His early occupations were manyfold and included heavy equipment operation, logging, truck driving, and insurance adjusting, until eventually focussing on Carmac Enterprises, his own Porsche repair and racing business.

Tony’s racing career began with the purchase of his first Porsche in 1963. The following year he achieved the BC Hillclimb Championship. Over the next few years, he raced and owned many cars including a Porsche RSK and Porsche RS60. In 1968 he won the 1968 Western Canadian Sports Car Championship. The next year he competed in Trans Am races in Washington and California. His career culminated in winning the 1969 Westwood Endurance Race in his Porsche 904. Tony’s racing success and special cars are documented in many books.

In 1972 he moved to Salt Spring Island where he started his final career with BC Ferries. It was at this time, taking a break from cars, that Tony built and lived on a 41’ steel sailboat. He owned several other boats over the following years and even included a sailing and fishing charter business in his pursuits.

Over the next 20 years Tony built three houses and a 6 plex on Salt Spring Island.

With the boating and housebuilding out of his system Tony was back to Porsches again. He imported dozens of Porsches from California and resold them in BC. He also enjoyed racing vintage Porsches up and down the West Coast with his son Gregory.

In 2010 Tony was inducted into the Greater Vancouver Motorsport Pioneers Society.

Tony had a vision for things which would have lasting value. Cars that he once owned here in BC are now treasured by collectors in Germany, Spain, US, and France. His 8 meter classic sailing yacht is now restored and raced in the UK.

Tony had a special innate talent and understanding for all things mechanical that more than compensated for his lack of formal training. He will be remembered for his ability to take on new challenges with confidence, particularly when it came to his passions for cars, boats and home construction or indeed, anything mechanical.

The family would like to thank Tony’s caregiver, Cheryl Denaat, for the extraordinary and compassionate time and care she spent with Tony over his last few months.

To honour Tony Campbell’s memory the family extends an open invitation to an Open House on Saturday June 18th from 1 pm to 5 pm at 111 Menhinick Dr., Salt Spring Island.