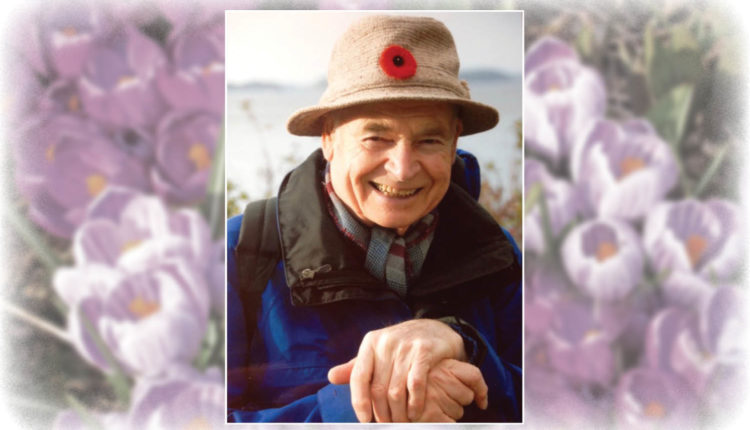 John died after a prolonged illness, in Comox, BC on August 8 at the age of 92. He was pre-deceased by his beloved wife Renée in 2017, and his dear sister Margaret in 2013. He is survived by his three daughters Marie-Françoise (George) Betty (Roger) and Rachelle (Neftali), his three grandsons Gregory (Dalal), Stefan and Nicholas (Jayme), his two great granddaughters Isla and Zadie, and his nieces Pat and Sarah and nephew John.

Born on December 8, 1925 in Huddersfield Yorkshire UK, John was the son of Percy Calam and Doris Lodge and the younger brother of Margaret. John came to Canada in wartime 1939 and attended Burnaby South Highschool, thereafter enlisting as a navigator in the Royal Canadian Air Force. He went on to do his Bachelor of Arts and teacher training at the University of British Columbia, working one summer in the Yukon for a placer gold mine near Dawson City, growing a beard, and working as an extra on a movie crew. He then started teaching and in 1953 married Renée his childhood friend and sweetheart from Belgium. Together they embarked on a remarkable adventure raising three daughters and pursuing a teaching and academic career that spanned four decades in communities as diverse as Forest Grove, Telkwa and Kitimat in rural BC, as well as Montreal, New York City and Vancouver. He offered his unique talents to being a teacher, high school principal, graduate and doctoral student at McGill and Columbia, editor, professor, department head, associate dean and emeritus professor with the Faculty of Education at the University of British Columbia. After retiring to Salt Spring Island BC where he and Renée created cozy homes with beautiful gardens, he continued to write, publish and mentor students and colleagues. He loved walking, hitchhiking and scooting around Salt Spring to chat with everyone he met. John and Renée enjoyed many happy years on Salt Spring before moving to the Comox Valley in 2016.

John was an accomplished writer, poet, musician, rock hound, kite flyer and craftsman. He could spin a yarn, make a walking stick, repair a clock, find an agate, build a sturdy bench and write a sonnet. His daughters remember his compelling bedtime stories, his efforts to avoid doing dishes by playing the guitar and making up colourful nonsense verses to well-known songs, and his courage in teaching us all to drive a VW van with manual transmission overseeing terrifying brake starts on hills, and precise parallel parking.

Throughout his life John enjoyed road trips, marvelling at the natural beauty, history and people throughout British Columbia and Yukon, including Haida Gwaii, Dawson City, and the Cariboo, writing or telling stories about his keen observations and insights along the way. As he aged and welcomed grandchildren and great grandchildren into his world John often said that he had been blessed with a wonderful life and “good innings.” The family wishes to give thanks for the exceptional care John received from his family physician Dr. Bobby Crichton and staff at the Lady Minto Hospital while on Salt Spring, and to acknowledge the compassionate care and support in Comox of Dr. Ric Potter-Cogan, the staff at the Comox Valley Seniors Village, the North Island Hospital and finally at The Views, where Nurses Rene, Dave, Miriam, Max and Liv provided superb palliative care for John in his final days. All who met or knew him said how thoughtful, humorous and respectful he was, playing his harmonica and enjoying ice cream and being a perfect gentleman even towards the end.

John will be deeply missed and mourned by his family, friends and colleagues. He requested no funeral and the family will hold a celebration of his life at a later date. Condolences can be sent to bettycalam@hotmail.com and The Calams at: 2936 West 13th Ave. Vancouver BC V6K 2T9

In lieu of flowers please consider a contribution to The Views, St Joseph’s in Comox (cvviews.com) Heart and Stroke Foundation (heartandstroke.ca) or to a charity of your choice.