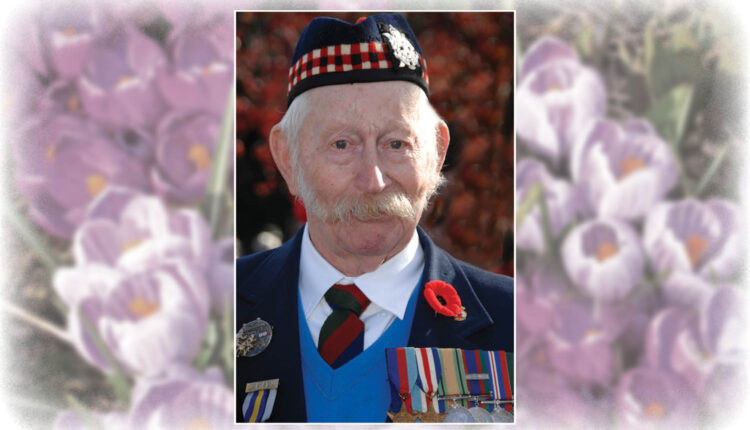 On the evening of September 6, 2020 Terry passed away peacefully at Greenwoods Extended Care Home on Salt Spring Island. He was 98 years old. Terry was the second eldest son of Jesse and Elizabeth Byron. He was born in Stockholm, Saskatchewan in 1922. Terry had four brothers; Ken, Howard, Colin and Franklin (Mike). He moved to Salt Spring Island with his family in 1934, at the age of 12.

As a teenager, Terry attended North Vesuvius School and Ganges High School and also joined the local 13th Platoon, Canadian Scottish Regiment. When war broke out he went overseas with the regiment, landing at Normandy on D-Day with the Second Division. He was wounded at the Leopold Canal in Belgium. After the Armistice, he was asked to stay on as a military policeman in Holland. Terry returned to Victoria and found work at Naden Dockyard. He was appointed Regimental Sargeant Major of the Canadian Scottish Regiment (Princess Mary’s). In 1948, Terry married Marjorie Miller and in 1956 they moved their young family to Salt Spring Island.

Terry had a 30-year career with B.C. Ferries but his real passion was farming which he continued throughout his retirement.

Terry is predeceased by his wife, Marjorie, his brothers Ken, Howard, Colin and Mike, and his eldest daughter, Darlene. Terry is survived by his sister- in-law Bev Byron, his children Darrel (Linda), Ken (Jill), Barbara, Linda (Kim), Ian (Christine), Michael (Trish), Barry, Teresa (Doug) and Vicki and his numerous grandchildren, great grandchildren and great, great grandchildren as well as his nieces and nephews and their families.

A very special thank you to Dr. Leon, the wonderful staff at Greenwoods and Lady Minto Hospital and all his Beacon Home Support workers. You all enhanced his quality of life with your kindness, dedication and respectful care.

Due to Covid-19 restrictions, there will be a small family graveside service on Saturday, Sept. 19, 2020. In lieu of flowers, donations may be made in Terry’s name to Greenwoods Foundation or the Royal Canadian Legion, Branch 92, SSI.