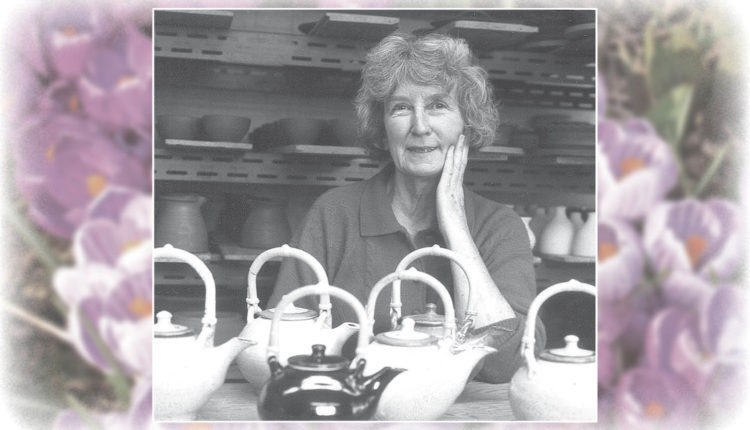 Meg lived a full and inspiring life. Born in the south of England to Leigh and Edith Jennings, Meg was the oldest of four children and grew up during WWII. She studied at King’s College in London to become a registered nurse. Meg married Geoffrey Buckley and emigrated to Port Alberni BC in 1956 where she first became interested in pottery. She moved to Vancouver and raised her daughter Anne on her own, working as a nurse as she transitioned into full-time potting.

In the 1970’s Meg was part of a cooperative pottery studio and store, Tansar Crafts, on 4th Ave. It was an expressive and free time in the Vancouver arts scene. In 1973 Meg met Tony Maidstone which was the beginning of a loving partnership that lasted decades. Part of the back to the land movement at the time, Meg and Tony moved to Saltspring Island in 1980. Together they created the simple country life they loved and Meg built a large gas fired kiln and pottery studio.

Although trained in BC, she was strongly influenced by the UK Bernard Leach tradition: functional and simple hand-thrown pottery for everyday use. After 50 years of potting, Meg retired at the age of 80. She died at 89 with her family by her side.

Meg will be missed by her daughter Anne Buckley and grandson Aidan Buckley of Saltspring Island, sisters June and Jennifer, brother Bill and their families in England, and her many good friends.

We are grateful to Dr Paula Ryan, Dr Tanya Berrang, the amazing nurses at Lady Minto Hospital, Sandi Muller and the caring staff at Heritage Place and all caregivers who helped Meg. Meg often expressed her wonder that she was living in this magical place and living a life she truly loved. A celebration of life will be announced at a future date. Please donate to the Saltspring Island SPCA in memory of Meg. https://spca.bc.ca/donations/salt-spring-island/