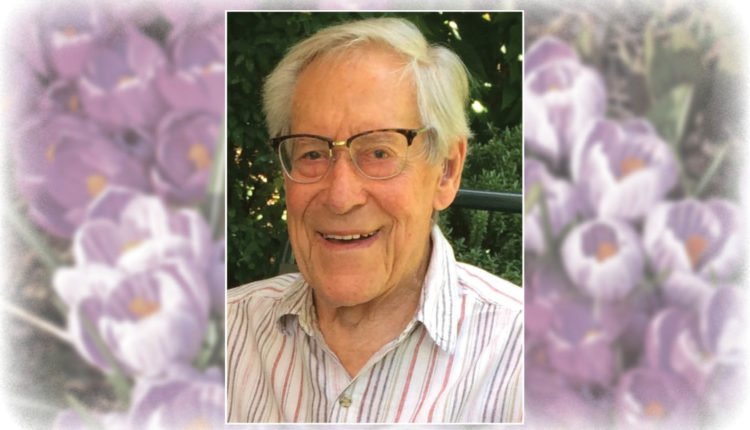 Peter Brodie passed away peacefully at home with daughters Dawn and Robin and his devoted dog Ryder by his side. He was predeceased by his wife Betty in 2017 and his son Scott in 2019. Peter was so pleased when he got the right answer on his favourite show “Jeopardy”.

Peter was born in Big Valley, Alberta and spent his childhood and school years in Calgary. He met his lifelong best friend Betty at Banff Springs Hotel in 1941 where they both held summer jobs. Their early courtship got off to a rocky start with Peter trying hard to make a good impression. He took Betty on a tandem bike ride on a freshly tarred road only to look back to see her covered in oil splatters on her new suit! Other misadventures did not deter them from a wonderful married life for 75 years.

Peter was a WWII Veteran. He joined the RCAF with sights on becoming a pilot but colour blindness steered him to became an aircraft engine technician where he worked extensively on helicopters. Search and Rescue missions took him to remote areas across Canada. Peter and Betty made several moves to air bases across Canada from Moncton to Winnipeg. Now with five children they bought a summer cottage “The Rainbow Ridge”, an acreage with 5 ponies! We were the envy of the air base. Their lifelong love of nature and wildlife was instilled in all the children who often and quite regularly brought home injured birds, stray cats and dogs. Peter was often the “neighbourhood dad” who organized outings for the local kids. He was a whiz in the repair and maintenance department and had tools for every need.

Retirement in 1968 from the Air force in Moose Jaw took Peter and family to Vernon, BC for a career in the optical business. With a menagerie of 6 horses, cats, dogs and 2 chickens Peter and Betty created a stunning garden where they grew 2 tons of raspberries a year, vegetables and variety of fruit on their 7 acres. They formed many friendships through hiking the Great Divide, canoeing Bowron Lakes, cross-country skiing, the Vernon Naturalist Club and many adventurous trips to Britain.

They moved to beautiful Salt Spring Island in 1988, where they established a lovely home and garden and became active members of the Scottish Country dancing group and Garden Club. Peter became a Fickle Fingers Golf member for years. His wine-making abilities was appreciated at many SSI events. How we all loved his superb home-made bread! Peter spent years as a Senior For Seniors scheduler and driver. Peter and Betty walked the Channel Ridge trails always with a dog by their side. In 2014 the family installed a bench “Rest and be Thankful” in their honour for all to enjoy. The bench has been a special place to toast past friends with happy hour sips and celebrations.

Support from his family, Dr. Ryan, Home Care and Community Nursing were wonderful in their support for Peter to stay in his home until the end. Meals-on-Wheels were committed and faithful in their deliveries each day and always had a cheerful word and a dog treat for Ryder. A special thank you to the neighborhood for their daily chats, visits and friendship to Peter.

A Celebration of Life will be held at the Brodie home on SSI in June. Date to be announced.