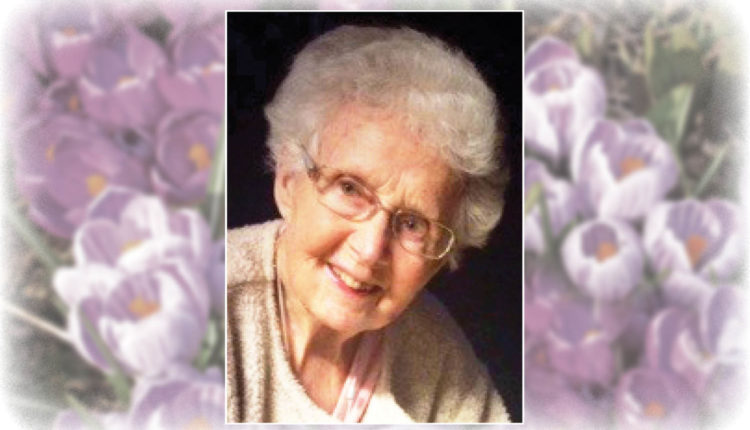 Betty was born in Calgary, Alberta and after graduation became a proficient Morse code operator in order to help with the war effort. That career was cut short when her father put the brakes on her moving to a military base to start her first assignment. She then worked (under the watchful eye of an aunt) at Banff Springs Hotel where she met Peter and the two became inseparable for life. Betty and Peter celebrated their 73rd wedding anniversary in October 21, 2017.

Peter and Betty were married in Edmonton in 1944 and lived on Canadian Air Force Bases from BC to Quebec raising five children plus accumulating eight horses, numerous dogs, many cats, fish, turtles and a rabbit.

Betty was a skilled and professional seamstress throughout her whole life, designing clothes for the whole family and teaching sewing classes, which always ended with a big finale fashion show.

Her creative and artistic side flourished with spinning, weaving, creative writing and painting with lessons from SSI Louise Woodward. Mom loved jazz as did Peter and they would dance up a storm to Blue Suede Shoes.

Peter & Betty retired from the Air Force after 25 years to Vernon in 1968 where they bought an acreage “The Berry Patch” that Betty soon transformed into beautiful gardens with an orchard of apples, pears, peaches, cherries and plums. Betty worked in consultation with the Summerland Research Station to develop two new raspberry varieties specifically for the Okanagan. They made several trips to Scotland and England with their “raspberry” earnings. Many a summer fete was held in the orchard with family games and Scottish country dancing.

Mom and Dad joined the Vernon Naturalist Club and had many trips canoeing and hiking the Great Divide, Broken Lakes, and Bowron Lake. Betty recorded faithfully all bird sightings around her home and at the bird feeders.

Scottish country dancing was a joy for them for many years in Vernon and continuing on Salt Spring until life’s aches and pains caught up with them. Salt Spring became home for the last 31 years where Betty pursued her passion for gardening and both became an active members of the SSI Garden Club. They participated in garden and plant shows. Betty also became a well-deserved Life Member. Well into her 90’s she would still walk her garden with secateurs in hand. All her children carry the “gardening gene”.

Betty and Peter were never without a dog in their life and 4 shelties and a border collie now rest on their island property.
Both were avid card players and they played each and every night without fail. On her last night, she won her last card game.

In 2014, a “Rest and Be Thankful” bench was installed on Channel Ridge trail for all hikers to enjoy. At 95 years young Betty and Peter often walked their favourite trail slowly but surely and savoured life and the view from their bench.

The family would like to give thanks to the wonderful staff at Lady Minto Hospital and to Dr. Paula Ryan for her genuine care over the years. The family will hold a garden gathering with friends in the spring to celebrate the life of Betty Brodie.

The family is full of sorrow but rich in memories of a wonderful mother and life partner.