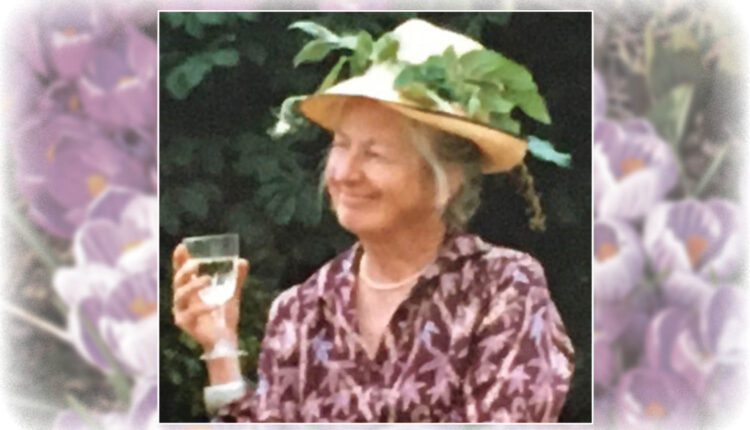 Nancy passed away January 27 after a slow decline with the same stoicism and stubbornness that she demonstrated throughout her life—uncompromising in her belief that we should live politely and modestly upon this gentle earth. It was easy to misconstrue her acerbic remarks, but to her closest friends and those who had no voice—the homeless, the natural world, the sick and victims of injustice—her actions, friendships and philanthropy spoke to a deep concern for the planet and humanity’s survival. She leaves behind the amazing women of her generation who fought hard to be heard, and an increasing circle of the next generations of cousins and friends who see their contributions.

Born in Victoria, an only child, to Captain John Grant and Jocelyn (nee) Weaver-Bridgman, she spent summers on Saltspring at WENNANEC (Lyoness) with her widowed grandmother, artist Maud Weaver-Bridgman and her great aunts who she described as “fun, original women” who taught her to build rafts, dig clams, recite poetry, speak Chinook and hike in the mountains while still remaining stylish. She also loved the mountains of Vancouver Island and her name comes from her mother who is the namesake of Jocelyn Hill in Victoria’s Gowlland Range; named by Commander Parry of the survey ship HMS Egeria after his friend’s first granddaughter. It was during this childhood with these original women that she developed her lifelong love of the natural world and islands.

As a young woman, she went to the enigmatic college, House of Citizenship, in London to develop her flair for languages which launched her into a career of which she spoke very little. To some she described herself as a “courier” based in London and to others a “tour guide” with “Italian employers.” Many of us joined her on her travels as companions, whether it was hiking in the mountains, sailing on the coast or exploring a hidden corner of Europe. Her cousins were always important to her; each of us quietly reminded of our lineage and whether we were once removed or second cousins. Our grammar was corrected, all attempts at assistance rejected. She would order meals at a restaurant in fluent Italian, German or French, demanding quality but never quantity. She was parsimonious to those of us with privilege, but generous to those without.

At fifty she returned to Canada permanently to nurse her aging parents. While broken down at the side of the road on Saltspring, she met the love of her life, Roy Braithwaite, an oysterfarmer, who pulled over to assist. They spent the first years of their marriage at Sansum Narrows and it was this time about which Nancy recalled most deeply. Roy christened his boat “The Fancy Nancy” which encapsulated everything about her—a sailboat built for beauty and practicality as they worked their oyster farm in the Narrows. They later moved to Trincomali Heights where Roy gently built their new home into the forest with his son Peter. Nancy embarked on the pioneering work with her women friends of starting the Salt Spring Conservancy—placing her own lands in one of their first conservation covenants named Ruffed Grouse Covenant, after the threatened bird she loved to hear in the spring. At this time, she adopted the title of honorary granny to the granddaughters of her beloved cousin Rosemary—Brighde, Christie and Charlie.

In the last thirty years of her life, living alone, she became a steadfast supporter and philanthropist of all facets of island community life in the arts, social justice and environmental movements. She volunteered at the library, attended every lecture and performance from the operas in Victoria to the Forum on Saltspring, supported local farmers, went to demonstrations against logging and pipelines turning up at protests with her iconic hats, woodpecker sign and sensible green wool coat made during the war. Many of her friends predeceased her, but she was always moving with the times, making new young friends who shared her values of not conforming to a patriarchal, corporatizing world. She took responsibility for the impacts of her own early BC ancestors and supported the formation of the Stqeeye’ Learning Society to promote well-being of indigenous youth through ecological restoration of the land. Even in death, she challenged corporate values with a forest burial at the Saltspring Natural Cemetery—returning her body to the forest she loved. The last three years of her life were difficult as she lost her mobility and independence, especially a year of isolation through COVID. The companionship of Amanda Love and staff at Greenwoods gave her comfort and love as did the support of her last “Committee” of friends, stepson Peter and cousins including Heather Robertson, who predeceased her, and Briony Penn.