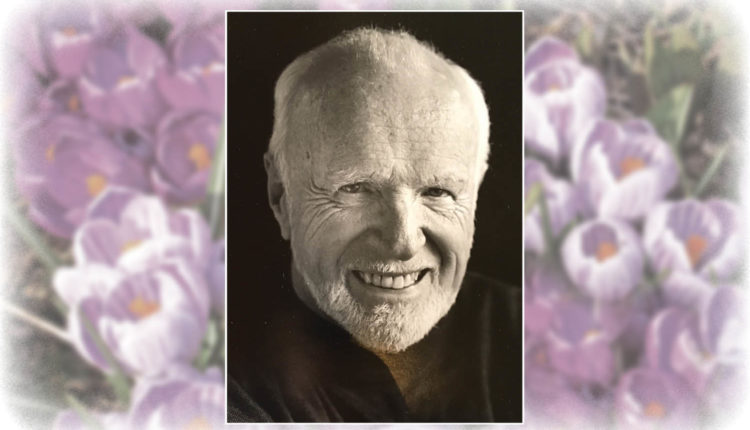 David Braide died on Thursday April 12, 2018 at Lady Minto Hospital in Ganges, Salt Spring Island, British Columbia. In his 91st year he took to the road in his beloved 1994 Subaru SVX, had a heart attack while underway, made it home, and was then transported to the hospital where he died with his wife Joan at his side. While he wasn’t ready to leave this earth, it is doubtful he could have scripted a better end.

David was born on February 23, 1928 in Liverpool, England (mother. Laura Davida Braide, nee Ker) where his father Reginald William Braide was posted with the British Army. In 1933 his father’s regiment transferred to India and David spent the next six years at St. Piran’s School in England. After joining his parents in India he, his sister, mother and governess left at the outbreak of the Second World War, and the family relocated to Victoria to live with his mother’s relations. David was educated at University School in Victoria BC, Trinity College School in Port Hope ON and the University of British Columbia, and received a Master of Arts in Economics at the University of Toronto. During his time at U of T, he met Janet Harbron, who would become his wife, until her death in 1987. David was a gifted student and had a lifelong love of economics and world affairs. He liked to tell the story about the time he took sticky tape and a razor blade into a microeconomics exam to construct a pop-up demand curve in the exam booklet.

David had been preparing himself for a career in the diplomatic service but having graduated at 20, didn’t make the age minimum. He accepted what he thought would be a brief posting with Canadian Industries Limited (CIL). That brief posting turned into a 36-year career with CIL culminating in his retirement in 1985 as Vice-Chairman. David took on increasingly senior roles in Montreal, New York and Toronto, including Vice-President of ICI North America Ltd., and made significant contributions to Canada’s international business standing as Chair of the Task Force on Canada-U.S. Trade Policy, Chairman of the Canadian Chamber of Commerce, Chair of the Institute for International Peace and Security and on the Executive Committee of the Canadian-American Committee. While David advanced in his career, Janet obtained a Master of Fine Arts degree and became a successful curator, author and lecturer on Canadian art history. They travelled extensively, often as part of Janet’s art history research, or repaired to the family country place on the St. Lawrence River near Iroquois where David kept a wildly over-productive vegetable garden that no doubt benefited from the output of CIL’s agricultural chemicals laboratories. David was a lifelong maker and fixer of things and would rather have repaired something five times than replace it. He was a talented woodworker and made several pieces of furniture, the first family TV and hi-fi units that are now family treasures.

David retired from CIL to lead the Niagara Institute in Niagara-on-the Lake where his devoted Schnauzer Heidi was a constant companion.

As important to David as his professional career, was his lifelong dedication to volunteer leadership and contributing to the communities in which he lived. In board roles that included The Montreal and Westmount YMCAs, The Montreal Museum of Fine Arts, St. Michael’s Hospital in Toronto, The Canadian Equestrian Team, The Lady Minto Hospital Foundation and Meadowbrook Seniors Residence in Ganges, David was known as a compassionate and principled leader who tended not to draw attention to himself but rather to help others shine. He was an early advocate for the advancement of women into leadership at CIL and a dogged supporter of Canadian art through growing the CIL art collection. These principles of giving back to the community live on in his children who have all made significant commitments to volunteer leadership in their professional lives.

In 1989 David met Joan Farlinger on an Art Gallery of Ontario trip to Thailand and Bali, and soon they were building a life together that included shared loves of travel, music, tennis and equestrian sport. In 1996 they de-camped from Toronto to Salt Spring Island where they built a classic West Coast house perched on the rocky Pacific shore. For David it was a welcome return to the West and the chance to be closer to his sister Penny and the Ker, Hibbard and Helmcken families.

David was a private man who enjoyed the peaceful quietude of his home life. Since purchasing the first Macintosh in 1984 he was a dedicated Apple enthusiast and always had the latest gear. As Chief Technology Officer of the household – and to some degree the family – he had an active presence on Apple forums and chats and was a willing tech trouble-shooter for anyone who would ask (and even some who didn’t).

One of David’s greatest pleasures was making (and consuming) his own marmalade, which he did for longer than anyone can remember. Even after decades of perfecting his recipe he still had the occasional disaster batch which was generally attributed to a bad season for oranges or the damp weather. He railed against the annual injustice of the Salt Spring Island Fall Fair. His marmalades never won ribbons and – to his dismay – were routinely disqualified for being “too chunky”.

David was a voracious news reader and stayed in close touch with world affairs and contemporary economics. At 90 he still had a powerful mind and was eager to debate big questions about the future, frustrated that he wouldn’t be around to “see how it all works out”.

While age did not erode his faculties it did soften his soul. Anyone lucky enough to know David in his later years will know he became a peacemaking and affectionate man who was deeply moved by the love and support of his family and friends. He persevered through innumerable health challenges with great stoicism and never took his eye off the possibilities for the future. His plan for the coming summer was to do some body work on the Subaru to get her looking herself again.

David was predeceased by his first wife, Janet Grace Mills Braide (nee Harbron, dec.1987); his sister Penelope Ann Teare (nee Braide, dec.1998) and brother-in-law John Harbron (dec.2015).
A gathering for family and friends will be held from 2:00 p.m. to 4:00 p.m. on Saturday, May 12 in the Veranda Room at Hastings House, in Ganges.

Those who cannot attend are asked to remember David in their own way. He would probably suggest that in lieu of flowers or donations each of you back up your hard drives, update your security software and change your passwords.